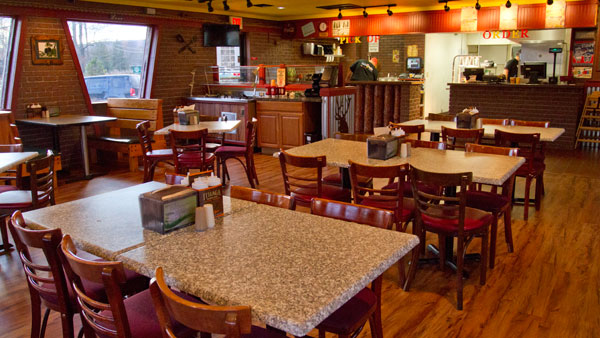 Fat Jack’s BBQ is a newcomer to Ithaca’s restaurant scene, which has been lacking as far as southern food goes. Fat Jack’s is a chain that currently has two other locations in the Philadelphia area with more coming in Southeastern Pennsylvania, New Jersey and Upstate New York. Its award-winning burgers, slow-cooked meat straight from the pit and laid-back atmosphere have made it become one of Philly’s go-to restaurants and one of the best barbecue joints north of the Carolinas. However, that comfortable feeling is lacking at the Ithaca location.

The building was a Pizza Hut more than 10 years ago, and no amount of southern decor could mask the signature rooftop. This fatal flaw and mediocre location — on Elmira Road next to Burger King and among a slew of car-parts services — may have been the downfall of other restaurants that inhabited the building before Fat Jack’s, which looks like just another fast-food place.

The framed photographs of wild animals look like they came straight from a National Geographic magazine, and the knickknacks on the walls look like they’re from grandma’s living room. The booths are made to look like logs, which gives it more of an Adirondack feel than the southern BBQ style that the chain is known for. The restaurant lacks any sort of curb appeal and would be very easy to drive past were there not large, tacky flags that read “BBQ” posted out front. It looks like the owners tried hard to create a laid-back I’m-not-a-Pizza-Hut vibe, but failed remarkably.

The staff, though small, is sociable, patient and helpful — especially to first-time customers. The staff members do not hesitate to suggest their favorite menu items and seasonings that may not appear on the menu explicitly. They pack plenty of character and try to make the customers more comfortable with jokes and friendly chitchat, creating a mom-and-pop environment in this chain establishment.

The order counter is small with equally small menu charts hanging above it. If the restaurant were packed, it would be presumably difficult to not only place an order, but also just to see what is on the menu. The employees will list off the most popular items and best-selling specials as well as help customers pick a meal suited to their personal tastes. While the staff is happy to help guide the customer’s decision-making to pick the perfect meat or sauce, the limited number of employees may pose a problem on a more crowded day.

The food, however, is respectable. The award-winning burgers live up to their title, taking first place at the 2013 Burger Brawl in Philadelphia. Though they are intimidatingly high-stacked, the burgers are almost impossible to put down once the first bite has been taken. The beef is juicy and the flavor of the Cheddar Jack cheese stands out individually from the other ingredients and does not mesh into one single flavor.

Another highlight of Fat Jack’s is the ribs. They are smoked for up to 18 hours, infusing Tennessee hickory undertones into the pork. The meat is tender but not dry, and it falls effortlessly off the bone. The Memphis dry rub is a bit on the salty side, but works well when paired with the much sweeter signature BBQ sauce, available in both hot and mild. Both seasonings complement each other and blend to create the perfect combination of salt, spice and sweet without sacrificing the star role of the meat itself.

Unfortunately, the sides are a bit lackluster. The macaroni and cheese ranks just slightly higher than instant Kraft, and the potato salad is bland and overwhelmed with mayonnaise. Both would benefit from salt and black pepper.

The food is priced decently in respect to the quantity and quality, but the likelihood of customers coming back for the ambiance is relatively low. In spite of that, the wait between order placement and eating is very short, presumably making the restaurant a good take-out destination. It takes delivery orders both via phone and through GrubHub, which is likely to be the best way to dine with Fat Jack’s.