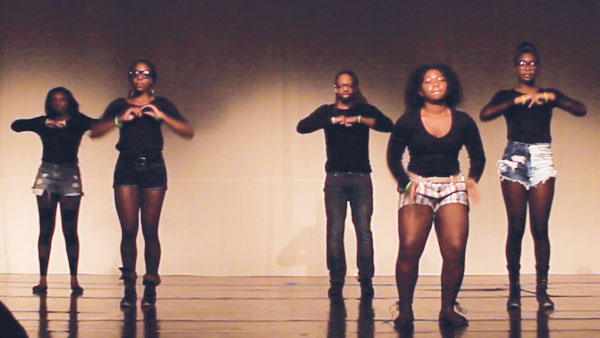 Courtesy of Ryan Shuler
The Ithaca College Step Team performs Nov. 17 in Emerson Suites. The team performed as a special guest in IC Unbound and On the Floor’s showcase. The dance group was reestablished last spring after disbanding in 2009.
By Sarah Hassett — Contributing Writer
Published: November 21, 2013

A group of 11 students stand in a circle in the middle of the Fitness Center aerobics room. A few students from the left side of the circle execute an intricate series of claps and stomps, advancing toward the opposite side. The two groups go back and forth before joining together in one synchronized combination. The battle comes to an end with one final stomp as spectators on the sides cheer.

“We should do that again, with more feeling,” Elijahda Warner, freshman step team member, said.

The battle featured some of the newest choreography by the revived Ithaca College Step Team. Senior captain Monique Peterkin said the club had existed in 2009, but because of lack of organization and communication between members it was unable to continue on as an official club. Peterkin made it her goal to someday bring it back to campus.

A “step” is essentially a collection of syncopated rhythms created by using the hands and feet. Members of the team stomp their feet or clap their hands while moving in different formations. Warner said this is just the simple explanation, but in actuality this form of dance is much more intricate. The tradition of step in the U.S. grew from songs and dances practiced by African-American groups in the early 1900s.

When Peterkin came to the college, she soon realized something was missing from her daily routine; she was no longer on a step team like she was in high school. So, this past spring, Peterkin took the initiative to revive the team. She approached her friends to see if they would be interested in holding a position on the executive board. Then she went to Megan Wagner, program coordinator of recreational sports, who is in charge of all sports clubs on campus. A few weeks later, Peterkin received the news that her club had been approved.

“I’m really excited to see what step team does this year,” Wagner said. “Because it’s such a unique and specialized dance, it will appeal to a variety of students.”

Though the team officially began last semester, Peterkin said the club hopes to make a name for itself this year.

“We use the auditions to see how people learn,” Peterkin said. “No one is going to come in and get it right off the bat, but if you’re willing to try and put in that work, we’ll take you.”

Warner had taken dance classes growing up, but had never previously stepped. But he said he knew it was something he wanted to try when he came to school.

“It’s hard,” he said. “I was so used to learning dance moves in eight-counts, but for this I had to put dance in the back of my head, and now I think of step as more of a music sheet with the claps and stomps as the tempo with quarter notes, eighth notes.”

Because the step team is registered as a performance and recreational club sport and not a student organization, it does not receive any college funding and must raise its own money. Peterkin said she hopes to create a chair of fundraising position to organize events to raise money for the club. The team’s current funds are dues collected by its members. A team uniform is at the top of the club’s list of needs once it retains sufficient funds.

The team was most recently featured in the IC Unbound and On The Floor showcase Nov. 17 as a special guest performance. Senior Jessica Caracciolo, president of IC Unbound, said she was impressed with the step team.

“I work in the sports club office and was able to witness the dedication and persistence they had to become an actual club,” she said. “I can’t wait to see what else they have in store for IC.”