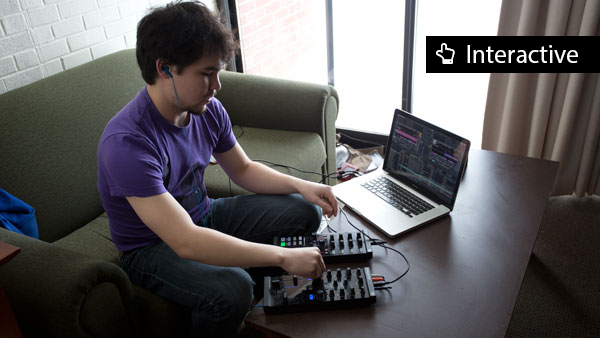 Tucker Mitchell/The Ithacan
Senior Geoffrey Guthe makes a mix on a Traktor DJ Mixing Controller in his apartment Feb. 16. Guthe has been DJing for six years and performs as DJ RageFace at parties and events on campus.
By Ashley Wolf — Staff Writer
Published: February 19, 2014
This article contains an interactive and is best viewed in a desktop browser. Play around with these DJ turntables for an interesting music editing experience. You can play, pause, and adjust the volume of the music. Try spinning the records to slow down or speed up the track.

Please note: this interactive is not an accurate representation of actual DJ turntables.


A rave, a party, a club or even a Halloween bash in Emerson Suites would not be the same without a disc jockey. With dimmed lighting, or no lights at all, people jive and twist on the dance floor, all clustered together in a giant, gyrating crowd. The dancing, energy and chaos would be missing without the upbeat dance music provided by student DJs.

Senior Geoffrey Guthe, who is usually called Yas by his friends and goes by DJ RageFace during gigs, has dabbled in DJing for six years. In Ithaca, Guthe plays about once or twice a month, mainly at Cornell University fraternities, Bombers’ athletic events, IC After Dark’s Halloween-themed Ravepocalypse and local dance club The Oasis. He also performs when he’s home in New Jersey, largely in bowling alleys.

As a sophomore in high school, Guthe became interested in electronic music and began to listen to mashups, which are generally DJ-mixed audio recordings adjusted to make new compositions. As he grew interested in the production of these mashups, he experimented with Virtual DJ, an audio/video mixing program, and Audacity, a sound recording and editing program.

When he began DJing, his sound was mainly hip-hop and video game music mashups. Though he did enjoy creating this type of music because of its sound and popularity, he got back into electronic sounds during his sophomore year at the college and began shaping his DJing around the electronic beats.

For the past three years, Guthe has taken his hobby and turned it into performances. He said DJing in Ithaca makes him feel more like an artist than when he’s home in southern New Jersey.

“It’s definitely more of a job [at home],” Guthe said. “Not as creative, as interactive, or as fun as it is up here. Here, even though I don’t get to play all the music I’d like to … it’s still a lot more free [spirited].”

Guthe said he likes how in Ithaca he can play trap, house or mashups, because in New Jersey he has to stick to more of the standard Top-40 music scene, such as Miley Cyrus, Taylor Swift or Katy Perry — whatever the venues request him to play.

Joel Almand, freshman DJ whose stage name is DJ Almond, said Ithaca is a hub for student DJs. Though it would be easy for campus DJs to become competitive with one another, they often teach one another new concepts or techniques, he said.

“From my experience, I think IC is so DJ-filled because of how accepting the returning DJs are,” Almand said. “It’s not a competition; we want to learn from each other.”

Guthe said DJing is more than just pushing play on a computer; DJs have to know when to play a certain track at a specific time.

“Some people think that DJing is all on a computer, super easy,” Guthe said. “But not really. There’s some parts of it — it’s a very different challenge … You have to play the right track at the right time, and as easy as that sounds, there’s a lot more that you can do as a DJ.”

Senior Maris Jones, a DJ who plays at the 2nd Floor Bar every Thursday night, said in order to choose the right tracks, it’s important to find a good set list and be immersed in popular and up-and-coming music.

“I’m constantly searching for new music, so the minute I end my set on Thursday night that means the next day I start searching again,” Jones said. “I didn’t even realize how much research would go into it, but you really have to keep updated with what’s going on.”

“The biggest thing that’s helped me in my career would probably just being honest with yourself as a DJ — being like, ‘Oh, the crowd’s not feeling this,’ by having the confidence to say, ‘Oh, I know how to change this,’” Guthe said. “I think that that’s hard for a lot of people. They want to play the music they want to play and they don’t understand.”

Guthe said he understands that what he wants to play is not always what the crowd wants to hear, and that sometimes he needs to put his wishes aside to appease his audience. Guthe can gauge the audience’s response to the tracks by watching the way it responds to the music based on the audience’s enthusiasm, whether the members are dancing or not and what he says is the “vibe” of the environment.

Sophomore Ryan Meara said a DJ should be able to read the audience, and he has noticed that Guthe can gauge the timing of his music well.

“What makes [Yas] a good DJ is his ability to read the room,” Meara said. “Yas can tell what type of music is most suitable by the vibes he gets off the crowd. He has a great internal clock and has a knack for perfect timing.”

Freshman Ian Loomis, another DJ on campus, agreed that making sure the audience is having a good time is key. He said if the crowd’s not on its feet, then he must be playing the wrong track.

“I like to play electronic music and dance music, and if they’re just standing around then that’s not something that you want,” Loomis said. “That’s how you get the vibe that maybe they’re not liking [a track as much].”

In order to book gigs, get a DJ’s name out to the public and find tracks to play, SoundCloud, an international online audio distribution site, can be very useful for DJs like Guthe, Meara said.

“Yas’ sound has matured to an eclectic mix of well-known and lesser-known tracks,” Meara said. “He is always on SoundCloud looking for new pieces to add to his set list.”

On his SoundCloud, DJ RageFace, Guthe’s music has heavy techno beats and bass layered in with both Top-40 radio hits and more obscure electronic beats to create thrilling dance tracks. He also mixes some popular music into the energetic dance beats, such as Lana Del Rey’s ballad “Summertime Sadness.”

Jones said putting mixes on SoundCloud is helpful because it allows people to hear her productions and get to know her as a DJ.

“I produce some of my own mixes, so I do make mixes that I’ve been posting up on [SoundCloud] too, just to get people aware of me,” Jones said.

Though some consider DJing as just a part-time job or hobby, others, like Jones and Almand, are thinking of pursuing it some way within their careers.

“I think right now it’s too late to just make it a hobby,” Almand said. “I’ve put way too much work into just making ‘Almond’ a side project. It’s also what I love to do most, so I’m happy it’s my career.”

“More people should look into it as something to do,” Loomis said. “I don’t really know anyone that doesn’t like music in some sort of sense, and it’s really fun to be able to play music for everyone and be the life of the party.”