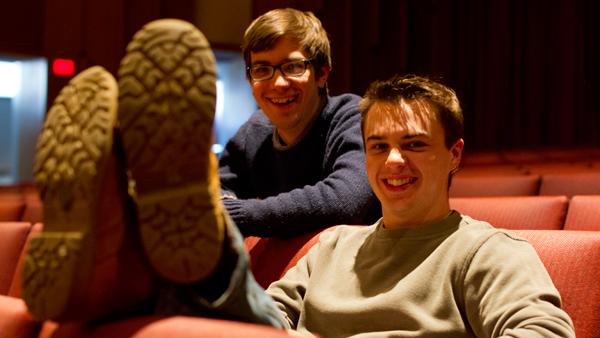 Though the student rock band Erik Caron Connection played its last gig at The Nines on Dec. 1, senior mandolin player Ryan Butler and senior guitarist and lead vocalist Erik Caron are in the process of starting a new band called The Northern Route.

The name “The Northern Route” came to the pair when they were sitting in Bandwagon Brewpub. They first chose just “The Northern” because north represents a strong direction, Butler said. However, after realizing that The Northern was already taken by another band, they needed another word to come after it. Butler said they had a theme of going in a new direction, which is why they ultimately chose “route.”

Caron said ECC split up because two of its members left, so he and Butler decided they wanted to rebrand themselves under a new name. However, Caron said the band’s sound won’t differ much from ECC’s and will continue to have some influences from the Dave Matthews Band. Butler described The Northern Route’s sound as “diverse” with some folk influences, while Caron described it as a “southern rock vibe.”

“We have a folky song, we have songs that are really rockin’, we have some nice blues songs,” Butler said. “We just have so many different influences, so it’s hard to label what the sound is. Dave Matthews also has a lot of influences, so I think that’s where the comparison happens.”

The pair plans to begin recording songs that they want to put on an album over winter break, which they plan on releasing in early March. However, Caron said fans of ECC will still be able to hear at least three of their old tunes on the new album, including the track “Always.” The band still plans to keep some of its old songs in its repertoire under The Northern Route.

“They’re going to be completely re-recorded,” Caron said. “Some haven’t even been released yet, they’ve just been heard [in Ithaca].”

The band’s persona while performing live is “very open” and “like a party,” Caron said. He said the audience often participates with them, but sometimes the audience doesn’t understand the way they perform and can be turned off by it. However, they plan to continue entertaining their fanbase with their performances in The Northern Route.

“We have a very energetic stage presence,” Butler said. “We all interact so much, whether it just be making faces at each other or just doing a groovy dance or something, just very lively and fun.”

“I always play with those guys because they play off each other really well,” Duran said. “It’s a lot of fun playing with them.”

Caron said their use of instruments like the mandolin, which aren’t as common in typical rock bands, adds to The Northern Route’s sound because it’s the reason they sound so different from other student groups.

“You don’t have mandolins in rock bands, that’s the big thing,” Caron said. “I mean, saxophone? Everyone loves a good sax, but when you put it with a song that it can really have this amazing solo [on], it adds a new depth completely.”

Butler said their music is different from the other student bands on campus mainly because of their sound.

“We’re friends with pretty much all the other bands, and what’s cool is to be involved and play [and] to have different sounds, which is really what we’ve got going for us,” Butler said. “Having college students around is huge because college students love lots of different kinds of music.”

The band has yet to do any live performances under the new moniker because they want to save it for next semester. Caron said that because ECC just disbanded, they want to establish themselves under their new name before playing a live gig.

“We’re gearing everything toward our official rebrand, re-release on March 1 or whatever day we release the album,” Caron said.

Caron said one show that is set in stone for next semester is Relay For Life on Mar. 23 in the Athletics and Events Center, as well as some gigs in local bars like The Nines, The Gates and Oasis.

During the recording process over the winter, Butler said, The Northern Route plans to upload webisodes of the recording sessions to the band’s website and post them on its Facebook and Twitter pages to keep the fans updated over break.

“We’ll be pretty active as a band the first semester — it’ll be really awesome,” Butler said. “It’ll be good, it’ll be fun, we’re really looking forward to it.”