Student to climb for a cause 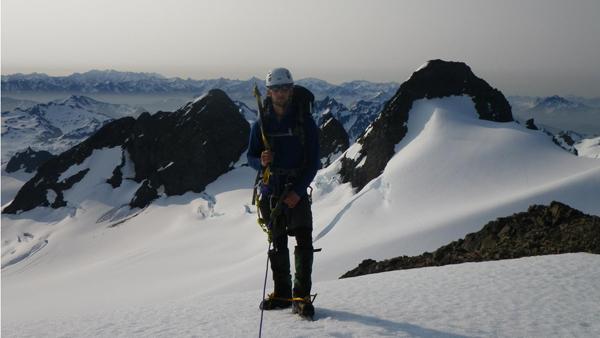 Some people climb mountains to overcome the challenge, to set records or simply for leisure, but not many people climb to save lives. However, to fight for multiple sclerosis research, senior Ben Lotstein will ascend up Pico de Orizaba, a volcano located in the southeastern end of the Trans-Mexican Volcanic Belt.

Through Climb for Hope, Lotstein and a eight other climbers plan to make the trip Jan. 5 and raise money for multiple sclerosis research. He learned about the program through working with Rare Earth Adventures, which guides trips for the organization, but he has had a long experience with mountain climbing.

“I climb because it’s fun,” Lotstein said. “It’s an escape, literally and figuratively.”

When he learned about Climb for Hope, he jumped on the opportunity. After pitching the plan to his boss at Rare Earth Adventures, he was given permission to be a guide for the Pico de Orizaba trip.

Pico de Orizaba is a dormant volcano that rises 18,491 feet above sea level, only 10,000 feet short of Mount Everest’s height. This will be the first time Lotstein will climb Pico de Orizaba, as well as his first trip with Climb for Hope, but his former climbing partner, Andrew McLaughlin, said he isn’t surprised by Lotstein’s project.

“He’s a go-getter kind of guy,” McLaughlin said. “It fits his personality very well. I think it’s less about the climbing for this one, but I know he’s excited for this opportunity.”

“Over two thirds of the money we bring in goes to the research,” Lotstein said. “Some groups will take the money and put more back into their business. We use as much money as can be used for research first and foremost.”

The nonprofit organization raises money by recruiting climbers to go on trips with the program. Each climber must raise $4,000 to participate, bring all of their own equipment and handle their own transportation to the climbing site. No experience is required, and climbers of all ages come from all over the country.

With at least eight climbers, Lotstein will raise $32,000 and plans to channel these funds to research for multiple sclerosis. His decision was influenced by the many people he knows with the autoimmune disease. He said he is also concerned about multiple sclerosis research going unnoticed.

“I don’t hear as much about MS as breast cancer,” Lotstein said. “The options are between the two, so I’m contributing all of my fundraising to MS research.”

As a guide, Lotstein does not have to pay $4,000 to climb and will receive a stipend for his instruction and assistance to inexperienced climbers, but he still has the drive to raise money with multiple fundraising events. Through an alliance with the Ithaca College Multiple Sclerosis Awareness Club, Lotstein plans to organize three different meal sign-aways in three months. The first happened in October, the second will happen this month and the third in December. Other events will happen in order to meet the set goal of $10,000.

The National Office for Multiple Sclerosis Awareness, located in Binghamton, contacted Lostein to help him with his efforts. They offered to provide multiple sclerosis-related items, such as bracelets, to help Lotstein raise money and spread awareness.

“It’s really exciting,” Harrier said. “There’s not a lot of multiple sclerosis awareness on campus. We’re excited to work with him. I think a joint effort will go further than either of us trying to do it on our own.”

Lotstein’s first meal sign-away was held Oct. 30 and students who sign up donated their lunch for the day to contribute money to Climb for Hope. So far, he has raised $2,000 through meal sign-aways and donations and is excited about his progress.

“I committed myself to yes it’s possible,” Lotstein said. “And apparently it is.”