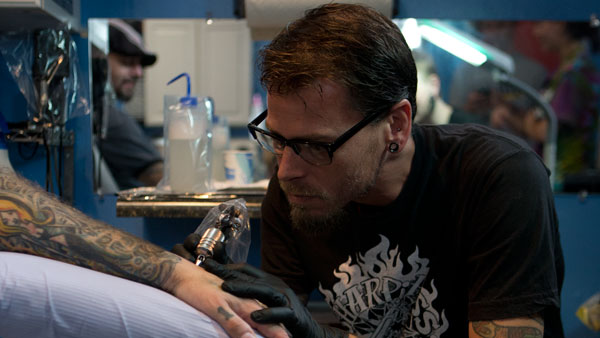 Ithaca resident Noah Drew cringes as James Spiers, owner of Model Citizen Tattoo, drags a buzzing needle across his left wrist. Drew, who is no stranger to tattoos — having full sleeves running along both arms — manages to keep a smile on his face as Spiers draws a new comic book symbol into his skin, adding to the collection on his heavily inked arms.

Ithaca alone has five tattoo parlors. Whether it’s because body art is more prevalent in society or because Ithaca has a liberal culture, the ink shops attract many college students. Spiers said he thinks Ithaca is like any other American city that wants to capitalize on society’s growing acceptance toward tattoos by creating more businesses. Yet others, like Ithaca College sophomore Madison Mangano, argue Ithaca’s eclectic collection of students and residents creates a perfect community for those looking to get tattoos.

General acceptance of tattoos has risen in the past few years. According to a 2011 Pew Research Center poll, 40 percent of Millennials — 18 to 29-year-olds — had a tattoo, an increase from 36 percent in 2008.

A more liberal worldview along with the freedom many college students have away from their homes could be reasons for the increase in tattoo popularity. Carol Oddy, the co-owner of Medusa Tattoo Studio, said her clientele ratio is about 50 students to 50 locals.

“[Students are] finding themselves,” Oddy said. “They get to actually start to follow [their] personality in their own environment instead of having to be where they grew up.”

There are arguments of whether or not tattoos are appropriate, and if they are a true art form or simply a stamp of a rebellious attitude. While fads of tattooing come and go, Spiers said he hopes society is growing more accepting of tattooing as an art form.

“It comes through shifts of popularity,” Spiers said. “Nowadays, it has to do with the proliferation of tattoo culture being more accepted by the media.”

Media attention tends to accelerate the development of trends and heighten their appeal, but Spiers said TV shows — such as “LA Ink” or “America’s Worst Tattoos” on The Learning Channel  — can be both positive and negative, though he leans toward the latter.

“A lot of our business is covering up s—– tattoos, and I think that makes a lot of kids go, ‘They make it look so easy on TV shows. I can do that, so I’ll just go and start doing it on my buddies,’” Spiers said.

The skill level of tattoo artists at the shops in Ithaca differs from studio to studio, and those who have gotten pieces done in the area all have their reasons for which shops are best. Sophomore Charlie Morris said he went to Stiehl’s Body Modification on South Cayuga Street because he knew one of the employees. He decided to get the words “perception is reality,” a statement his father said to him as a child, tattooed on his inner right bicep.

“I knew an employee, which made me feel a lot safer about everything,” Morris said. “I [consulted] with a random [artist] who I ended up trusting a lot. He took my original idea and morphed it into exactly what I was thinking but couldn’t bring to words. I knew he was the artist I wanted to do my tattoo.”

The skill, practice and time that goes into tattooing makes an artist reliable and respected, which is something that affects people’s decisions around getting a tattoo — even for young people, Mangano said.

Oddy said she has never found one specific theme or meaning in the tattoos of most of her student customers, because they tend to be more individualistic with their ideas. But for the most part, there isn’t one central theme or meaning customers have, she said.

A guest artist at Medusa Tattoo Studio on West State Street gave Mangano her tattoo last fall. Mangano said she chose the tattoo design — a shaded flock of birds wrapping around the inside of her left wrist — to remind herself of her struggle with depression and cutting during her senior year of high school.

“The birds are actually covering up the scars,” she said. “When I got them, it reminded me of the pain and it would be the last time that I had that pain. Every time I wake up and I see [the birds], it just reminds me that it’s a new day and I can keep going.”

Oddy said a common theme among customers is getting words and small designs tattooed on their bodies.

“People will get big blocks of text, like lines and poems, lines from the Bible, not one word or two words — they’ll get whole paragraphs,” Oddy said.

While the meanings of each person’s tattoo differs, for those who have or create tattoos they love, it’s a simple reminder of their own passions, struggles and triumphs, Spiers said.

Mangano cherishes her tattoo and the personal hardship it represents. She said her tattoo artist reminded her of the beauty in her ink: “You are in possession of a unique piece of art.”