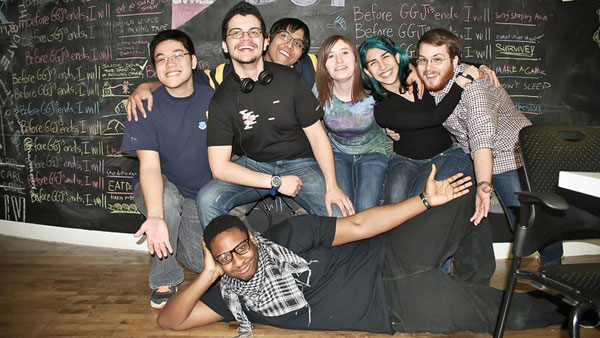 Courtesy of Kate Wareham
Members of the IC Game Developers Club pose during Global Game Jam, an event where gamers come together to create video games, on Jan. 25–27, 2013, in New York City. The college is hosting a 48-hour jam on Jan. 24.
By Amanda Hutchinson — Staff Writer
Published: January 22, 2014

The appreciation for video game culture is ingrained deep in the Ithaca College community. Clubs such as the Gamer Symphony Orchestra, IC Gamers and IC Game Developers embrace student interest in the music, the creation or the playing of video games. This weekend, IC Game Developers is sponsoring the college’s first event as part of the Global Game Jam, a meet in which teams around the world gather at universities and other locations to create games in 48 hours. The college’s Global Game Jam will take place at 5 p.m. Jan. 24 on the third floor of Williams Hall.

Born from other similar events and the International Game Developers Association, the Global Game Jam was founded in 2008. According to globalgamejam.org, more than 1,600 participants in 23 countries produced 370 games for the first event in January 2009. In 2013, more than 3,000 games were produced by participants at 309 jam sites in 63 countries.

Each year, participants form small groups at jam sites, which are typically chosen for their access to technology support and security, and collaboratively create a game based on a theme the organization chooses. Past themes have included “extinction” in 2011, the image of a snake eating its own tail in 2012 and the sound of a heartbeat in 2013. While students at the college have joined the Global Game Jam in previous years, junior Kate Wareham, president of IC Game Developers, is hosting the event on campus for the first time this year.

“Last year, me and a bunch of the other kids in the group went to New York [City] to do it, and it was really cool,” Wareham said. “We met a lot of cool people, and we got to work with them to make a game happen.”

Junior Jordan Riley, who got involved with the IC Game Developers during his freshman year, decided to join the Global Game Jam after hearing about past experiences from other club members. He said creating a local jam site in Ithaca also provides more opportunities for newcomers to participate.

“I think this might have a decent draw-in for other people on the college campus that have a little bit of interest in game development and might have never really set foot into making them but may actually find that they have a talent,” Riley said.

The event begins with keynote speakers in the field of game development. This year’s speakers include Jenova Chen, co-founder of thatgamecompany and creator of the critically acclaimed game “Journey.” After the keynote speeches and theme announcement, teams have until 3 p.m. Jan. 26 to produce their games, and each team presents its game to other groups at their jam site.

As a veteran game jam participant and faculty adviser to the IC Game Developers, computer science professor Nathan Prestopnik is organizing this year’s jam site with Wareham. He said while some of the games produced at the Global Game Jam have attracted attention outside the development community, their creators often don’t aim to release the games into the marketplace. Instead, they are shared among friends, which further promotes the collaborative goals of the event.

One of the Global Game Jam’s sponsors, GameSprout, is a game development site that complements the collaborative spirit of the event by allowing developers to upload their demos, art, music and more for playtesting and feedback from their peers. Jill Sciulli, director of marketing of GameSprout, said the partnership with the jam is mutually beneficial.

“Global Game Jam participants could get the experience of putting their games on GameSprout and seeing them grow,” Sciulli said. “In return, GameSprout would have all the exposure to all of these game developers.”

Global Game Jam’s organizational mission is to educate people about game development and get them interested through this event. No experience is necessary, and while registering ahead of the event is helpful, anyone can stop by and check out the progress of the teams.

“My main hope is for everyone to have a good time,” Wareham said. “It’s for people to get together, see what game development is like, try it out. Some people may even find that that’s what they’re interested in. I mean, if I hadn’t tried it out, I definitely wouldn’t have known if that was what I wanted to do or not.”