SWUG life: Senior girls reflect on how their social lives evolved throughout college 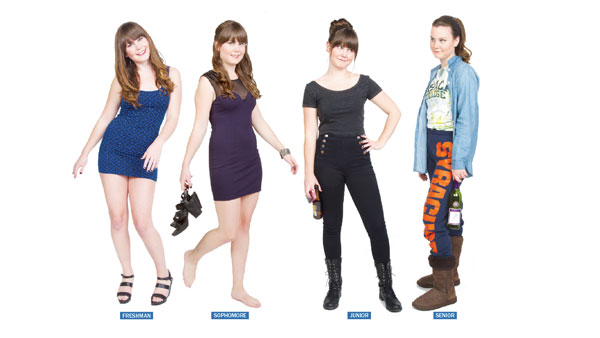 “This is really happening,” I thought to myself as I stood in a bar bathroom on day three of Halloweekend surrounded by women in barely-there Spandex shorts and sports jerseys with neon bras peeking out from under the loose mesh. I, however, was dressed as a rooster. With a red feather boa, red baseball cap, foam beak and zero sex appeal. And I didn’t give a damn.

I stood up against the mirrored wall waiting for my roommate, senior Erica Palumbo, who was inside a stall. One woman came strutting in with a corset made solely of playing cards. Another shrilled when she realized she was standing next to the woman whose old ID she was using. They gushed, and I needed another drink.

To my relief, Erica exited the stall, and four women piled in behind her. While Erica washed her hands, I gave her a nudge.

“Watch this,” I said to her with a smirk. “Hey guys, can I ask you a quick question?”

The hair-fixing and paper-towel dabbing stopped, and their makeup-smudged eyes were on me.

“Can you humor me, and tell me what year you all are?”

A unanimous “Freshman!” rang out. I turned to Erica and gave her an I-told-you-so look before one brave freshman spoke up.

Cue simultaneous eye rolls and face-scrunching. SWUGs are Senior Washed Up Girls. In this moment, I was proving to Erica that we were just that.

In my last months of college, the local bars — or at least the weekend-night circuit bars — are not as exciting anymore. The forbidden fruit has been digested. It has come to the point that my roommates have befriended the bartenders and bouncers. We’ll stay at the bar at least 30 minutes after the lights come on and proceed to “Club Sammy’s” afterward or hike up Hudson Street only to go home and demolish two boxes of mac ’n’ cheese. We’ll wear the coveted hoodie-and-leggings combination to classes the next day — like most days — and our major conflict later that night will be who has to get up from their spot in the living room to put the DVD in the player.

But, my love for the party hasn’t died. The fact of the matter is I’m not trying to impress anyone anymore. I’m not going to wear high heels to make myself even taller than most guys. I’m not going to pretend that wearing tank tops at night in 40-degree weather is a good look. I refuse to wake up an hour before class for the sake of putting on eyeliner and blush. I’m over that life.

Lingering around college campuses for a few years now, SWUG was made famous by Raisa Bruner, a now-Yale University alumna, last March — among other writers for the Yale Daily News. I read Bruner’s lengthy ode to the SWUG, and it dawned on me — the woman she described was me. My “decline,” as Bruner calls it, is more beer-soaked than her “wine-soaked” senior year, and she spoke volumes to my undeclared disposition and unexplained motives in my social life.

But there was one major difference between our lives that I couldn’t shake — Ithaca College doesn’t have fraternities and sororities like Yale or other major universities do, therefore my SWUGdom is much more different than Bruner’s. This got me thinking: Maybe each institution just houses its own type of SWUG. Greek life or not, I knew for a fact I was living the SWUG life and living it hard.

Anatomy of an IC SWUG

We Ithaca SWUGs are our own breed. While we aren’t your typical sorority sisters who hold a certain status with the frat brothers, we establish ourselves within our schools, which tend to act like fraternities or sororities. My freshman year, I took classes in multiple buildings with students of different years and majors. This year, I have three classes with essentially the same cluster of senior journalism students. They’ve seen my face around the Park School, they know what I’m involved in and who my friends are. They also know what I look like during a 9 a.m. class during the winter when I’ve rolled out of bed 10 minutes before class begins.

Sara Kay, a senior communications management and design and theatre arts management double major, who often opts for a baseball cap and leggings for her daily getup, said she feels like she has been playing the SWUG game the past couple of years.

“My mom always told me to never leave the house without mascara, lip gloss and a hair brush,” she said. “I asked her, ‘Why?’ She said, ‘Well, you never know who you are going to meet.’ I feel like I’ve met everyone I’ve wanted to meet here.”

Sara is taking advantage of her senior year in that she is not looking for a romantic relationship, but is instead learning how to live with herself. Her reasons also include that she is no longer interested in the upperclassmen men and refuses to mingle with the underclassmen because “you can’t touch a freshman, that’s gross,” she said.

“At the end of the day, when I’m done running around my five classes and 10 meetings, I don’t care what I’m doing Friday or Saturday night because I want to go to sleep, I want to drink wine, I want to catch up on my Netflix, and I want to wear sweatpants,” Sara said.

We continued to discuss the fact that we know we don’t run the campus and look like ragamuffins all the time. But usually we do because we are just too darn busy and we don’t care — a deadly combination that doesn’t allow for cute outfits.

“Why wear something uncomfortable when you have an elastic waistband hanging in your closet?” Sara said.

Senior Beecher DiNapoli and I sat across from each other on a bench, both of us wearing sweatpants. I immediately brought up our friend’s birthday party we went to the weekend before where, instead of playing drinking games and the like with our friends, Beecher ate four pieces of pizza, fell asleep on a couch by 10 p.m. and woke up two hours later — only in the hopes of finding more pizza.

We agreed that napping during parties happens, especially when you know your friends aren’t going to ditch you. Beecher explained to me that often she and her roommate, senior Jessie Kelly, would buy chips at the bar instead of drinks. That past weekend, Beecher and Jessie even managed to get a two-for-one deal at Kilpatrick’s for Doritos — an accomplishment in any SWUG’s mind.

I brought up that maybe our priorities just changed when we became seniors, and Beecher nodded in agreement. She told me that what she and her roommates wear to the bars has changed, too, in that they aren’t trying to please other people but please themselves.

“We now take our first shot to loving ourselves,” Beecher said. “I feel like our sophomore year, we dressed because we were going to find someone. This year, we were like, ‘Let’s just wear what we want to wear.’”

Jessie told me the next day that she loves to wear her Converse sneakers to the bar because “no one looks at your feet.”

I immediately shared my love for wearing my Birkenstocks to accompany my nighttime outfit — when the weather didn’t make me hate leaving my bed every morning.

Both Beecher and Jessie said even though they are bored with the bar scene, it’s better than going to a house party. Jessie reflected on her past love for cramped houses and unfamiliar faces.

“I was obsessed with house parties and going to a party where you literally knew no one,” she said. “That was exciting to me. The other weekend, we went to a baseball party, and we walked in and we were like, ‘Are you kidding me?’ It was packed, we didn’t know anyone. That’s not fun anymore.”

After I drag myself out of bed on a Sunday morning, I don my teal fleece blanket–cape and head for the futon mattress laid out on my living room floor. On the couches, I’ll usually find a couple of my roommates already settled in, discussing the night that just hit us all over the head. But before any more discussion, food needs to happen.

Being an adoptee into a house of five women who lived in the same house the year prior, I was introduced to the glorious food-a-thon that is Fat Sunday. I haven’t participated in an entire Fat Sunday because of editorial obligations — shoutout to The Ithacan for keeping me in shape — but I have witnessed the aftermath.

I’ve come home to find the remnants of a sheet pizza and two boxes of wings on our floor. I’ve gone to The State Diner with my roommates only to cover our entire table with plates. There might have been room for one syrup packet, nothing more.

Beecher and Jessie, after telling me about their weekends, matter-of-factly mentioned their house’s love for a good Fat Sunday.

Beecher no longer participates in the eating frenzy, but said her roommates had Mark’s Pizzeria pizza, Panera, Oreos, three bags of chips, Ben and Jerry’s and made their own cookies one recent Sunday.

Both Beecher and Jessie said they have since signed a petition for the end of Fat Sundays, but Beecher said her roommates found loopholes in the agreement.

“Right now, they are at home eating candy and Oreos,” she said. “It’s now Fat Mondays and Tuesdays.”

Erica and I sat in front of our computers this past Saturday night, painstakingly finishing our homework before going out, our personal pint bottles of Stella Artois and Magic Hat #9 aiding the process. We stopped our work to Snapchat, think about what to wear that night, dance to Frank Ocean and then eventually change into whatever we wanted to go out in — for me, this always includes my favorite combat boots and dressed in black head-to-toe. The night before, our entire house didn’t leave to go bar-hopping until midnight. Partially because of our incredibly slow nature, but mostly because we were having too much fun singing Blink-182 and dancing on our dining room chairs.

Washed up or not, SWUGs just know how to have a seriously good time. And if that means not looking like we did freshman year, then so be it. So don’t let our appearance in class drive you away — we are just evolving into what we were meant to be, for the meantime anyway. Once I graduate, move on from college and enter real adulthood, this lifestyle will surely fade. For now, the SWUG club is here to stay.