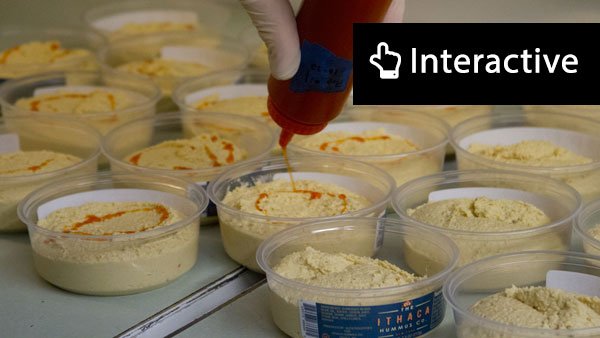 Founded by Chris Kirby, The Ithaca Hummus Company was launched in February of 2013. The process to make each cup of hummus is a long one that takes hard work. Rich in spices and special ingredients, this preservative and GMO free product is one of a kind.

Wondering how The Ithaca Hummus Co. gets its hummus ready to distribute to local businesses? Now you can find out. Follow along to see how Kirby prepares each cup of hummus. An ice cream scooper is used to scoop the hummus into each deli cup. Kirby also makes sure that there is no excess hummus on the sides.

Drag the scooper to the bucket to see this in action.

Continue to see how equal amounts of hummus are determined. All cups of hummus are weighed in order to make sure there are equal portions in each one. You made it to the container. Now you know how The Ithaca Hummus Co. packages its delicious hummus.

Please visit this page using a desktop browser to view the interactive.


The sharp scent of lemon wafts from the open plastic package of hummus from Ithaca Hummus Company. Once the hummus is sampled, however, the lemon — one of the key ingredients to achieving the tangy flavor of of the creamy, beige-colored dip — blends perfectly with the other ingredients. It helps create a zesty and rich spread that melts in the taster’s mouth.

One would never expect to find a hummus company quietly tucked away behind a wooden nature lodge along Long Creek Road in the Town of Ithaca.

Here is where, Chris Kirby, 27, owner and creator of the Ithaca Hummus Company, spends most of his time. He began selling his tubs of hummus to Collegetown Bagels, GreenStar, Ithaca Bakery, Brookton’s Market and several other local business and eateries in September 2013.

Kirby said his dedication to creating a healthy snacking alternative is what drove him to construct his company.

“Most places won’t buy a product if it doesn’t have a 45-day shelf life,” Kirby said. “I chose hummus because the base of the product is beans and garlic, they can stay ultra-fresh for long periods of time, and it’s a healthy snack you won’t feel guilty about eating … It was just compatible with what I’m trying to accomplish.”

Kirby discovered his passion for culinary arts while working part-time in kitchens as a high school student in his hometown of Baltimore. He went on to earn his culinary degree at Johnson and Wales University, and soon after propelled himself into the industry, fashioning dish after dish of delicious cuisine across the country.

“I reached the end of my high school career, and I just really did what felt natural at the time, which was culinary school,” he said. “I enjoyed my job, and I wanted to take it from prep-cook, pizza, dish-washer guy to an actual chef.”

From the energetic city of Washington, D.C., to lively Las Vegas and finally onto the restaurants and wineries of Austin, Texas, Kirby’s hand-crafted meals have graced the plates of many.

Despite where his talent in the kitchen has taken him, Kirby currently resides in Ithaca, earning his bachelor’s degree in Hotel Administration at Cornell University, while single-handedly running his garbanzo bean–centered business. He said despite the success of his burgeoning small business, he wants to get his bachelor’s degree because he is interested in the business aspect of the culinary industry and has aspirations to launch hummus companies in other towns.

His mother, Susan Kirby, has supported her son as she watched him integrate himself into the small business world, even making him a cyan fleece with the company’s logo, which he often sports while making hummus deliveries.

“When he was working in the restaurant industry, he was upset and disappointed that the consumers weren’t getting the quality that they were paying for,” Susan Kirby said. “So that speaks to his integrity of wanting to produce the best possible product.”

Creating one batch of Ithaca Hummus begins with 10 pounds of raw garbanzo beans. The beans are soaked for 12 hours in water, then cooked in stainless steel vats for three hours in boiling water, then drained, cooled overnight and mixed with fresh squeezed lemon juice, olive oil, salt, red pepper flakes and other spices in a large bucket to be portioned out in 7.5 ounce deli cups. Chris Kirby himself brands each cup with the Ithaca Hummus Company label. Currently, he only sells plain hummus, but he plans to add more flavors in coming months.

Standing in front of a 5-gallon plastic container, Kirby meticulously scoops 7-ounce portions of his homemade hummus into their packaging with an ice cream scooper, making sure there is no excess on the sides, and carefully tops off each one with a drizzle of paprika oil.

“I touch every single one of these … these are my babies,” Kirby said. “My parents were up here visiting a couple weeks ago helping me, and my dad put a little bit too much oil. I’m very particular about my product.”

Kirby said the fact that he has no employees speaks to his desire for a flawless product.

“I have trust issues,” he said, laughing, while sealing off the last of the week’s batch of hummus to circulate throughout town.

Before Kirby brought this delicious blend of beans and spices to Ithaca, the flavor was developed in his mom’s Baltimore kitchen.

“When he was trying to get the consistency and the taste just right — I have pictures of my kitchen — it looked like a production line,” Susan Kirby said. “We all tasted, and he tweaked it until we agreed he found the right combination of everything.”

Chris Kirby said balance in his work life is key to his busy schedule. Between classes, preparing the product, marketing, sales and distribution, hummus is not the only thing Kirby has on his plate.

A large portion of Kirby’s success with his company is because Ithaca has a thriving local business market, he said. Among other businesses, Kirby distributes a large portion of his hummus to GreenStar Natural Foods Market, about 48 containers of the 200 he makes a week.

Kirby said he enjoys being embedded in Ithaca’s community and prides himself in maintaining relationships with the businesses he sells to.

“I’m in the stores three to four times a week,” Kirby said. “I get to go and actually meet the people that I’m selling to daily. I’ve developed relationships with my customers.”

Giles McCarty, a GreenStar employee, said Kirby is easy to work with.

“[Chris] is very personable and always talks to you,” McCarty said. “Customers come in and say that they really enjoy the hummus. I’m really excited for the new flavors as well.”

However, creating a local product comes with its challenges. Kirby currently outsources his beans from California because farmers in the area are hesitant to grow large quantities of garbanzo beans, making it tough to in-source all the ingredients, he said. Despite this, Ithaca Hummus is locally made and preservative and genetic-modification free.

“The resources just aren’t here yet,” Kirby said. “From a farmer’s perspective, they’re not going to go out on a limb and be the first ones to start growing garbanzo beans if they don’t know that they’re going to have it sold. That’s kind of what I bring to the picture.”

Kirby said he is currently working with farmers in the area to establish a relationship in which he can purchase all his ingredients from local farms, resulting in a hummus that is not only locally produced, but made with local ingredients.

“[Ithaca] is an agricultural hotbed; we produce a lot of produce and it stays here typically, and I really kind of saw this as a way to make room for new products to be grown here,” Kirby said.

Though many of the skills Kirby acquired in the food service industry have carried over to his business, the aspects that separate him from other food businesses is his passion for healthy lifestyle and wholesome community, he said.

Susan Kirby has noticed a change in her son’s enthusiasm toward leaving busy restaurants to start his own business.

“He’s much happier because he’s doing something he believes in, he’s not just putting something out there that he doesn’t stand behind,” she said.

Kirby said he believes the increase in small businesses providing local foods is a trend that is not fading away anytime soon.

“It it is possible to produce local food,” Kirby said. “Just because some of the barriers and the standards in the industry right now are products with two- or three-month shelf life, doesn’t mean it’s the right way. It just takes enough people to say that they want something different.”