The Kraken Quartet to unleash the power of percussion in performance 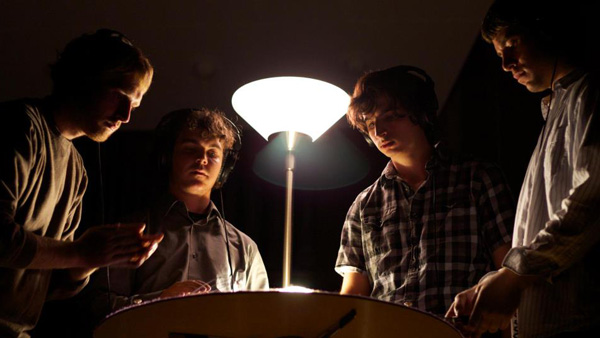 Seniors Chris Demetriou, Andrew Dobos, Taylor Eddinger and Sean Harvey will showcase a range of new features the quartet added to its repertoire. Demetriou said they will be featuring their new electronic style that combines acoustic sounds. With the new sound comes a new performance. Demetriou said the audience can expect a non-traditional percussion show.

“There are going to be lots of live instruments that people have probably never seen before,” Demetriou said. “There will also be sampling of recorded sounds and audience participation. It will be a very interesting experience.”

The Kraken Quartet will also feature two student-composed pieces, one of them being “Memory” by Indiana University student Evan Chapman. Both pieces are relatively new, having been written in the past two months.

Demetriou said all four of the members have been working with each other for a little more than three years and have been together in a combination of different groups. He said the group’s chemistry was evident from the beginning.

“We came here as freshmen and gravitated towards each other as friends and as musicians,” Demetriou said. “The combination of us spending time together, hanging out and enjoying playing music with each other, it was just a natural fit to become a quartet.”

Dobos said the quartet chose its music for the performance based on many factors. He said the group especially pays attention to how the pieces will be performed.

“A lot of the music we perform we choose to perform because of the performance decision, instrumentation and just the general end-product sound,” Dobos said. “When anyone else performs that piece it’s unique every single time.”

In an effort to combine the best of both musical genres, Eddinger said, the quartet will be combining two sounds for a grand effect.

“We’re all interested in playing music that you wouldn’t see typically performed in a percussion quartet setting,” Eddinger said. “We are a mix between contemporary classical music and rock music. We are really trying to bridge the gap between those two polar opposites.”

Confident in the quartet, Dobos said the group has a strong dynamic, something that will show throughout their performance.

“We bring good musicality to the group, and we started to learn how to feed off of each other,” Dobos said. “At the rate we are going, I don’t think any of us want to stop anytime soon.”