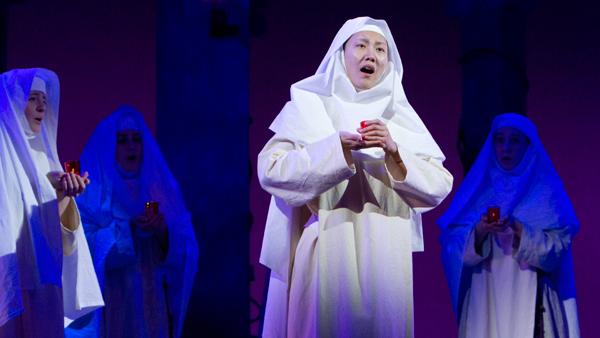 Gray arches frame brown doors to a holy convent. A statue of Mary stands in the doorway. Several nuns rush on stage and Suor Angelica begins to sing a sentimental aria. After intermission, a comedic tone washes over the stage as a sickly old man takes his last breath in his bed. Surrounding him, his family anxiously awaits his death before beginning to argue over his will.

In collaboration with the School of Music, the theater department will perform two one-act operas by Giacomo Puccini called “Suor Angelica” and “Gianni Schicchi.” Spanning 48 minutes each, the operas are part of a three-act trio known as “Il trittico.” Usually, the collaboration between the departments results in one three-act opera, but this year director David Lefkowich decided to produce two contrasting one-act operas.

The first opera, “Suor Angelica,” surrounds the title character (graduate student Wenhui Xu), who is sent to a convent by her aunt Zia Principessa (graduate student Zohaniris Torres Rosado) because she got pregnant out of wedlock. Throughout the opera, set entirely in the convent, Suor Angelica seeks redemption through prayer and service to the convent.

Seniors Sara Stevens and Lydia Kubiniec, assistant directors, said they chose these operas because there is a huge disparity between the two. “Suor Angelica” is a sadder opera, while “Gianni Schicchi” is a comedy. Stevens said it’s interesting to see two shorter operas, because three-act operas can seem lengthy.

“They are very contrasting,” Stevens said. “We have one that’s very sad and about nuns and one that’s funny and about a family. They are part of the same three-part opera, so the music is all Puccini. It’s kind of similar, but really you get to see two different plots, two very different situations, and that’s kind of interesting.”

After auditions at the end of the summer, the cast prepared for their roles on their own until the beginning of this semester, when they began full cast rehearsals. They only rehearsed together for three weeks, Stevens said. Kubiniec said their rehearsals were the definition of the cast’s work ethic.

Rosado, who is also in “Gianni Schicchi” as Buoso’s greedy cousin, Zita, said she experienced a “grueling” rehearsal process.

“It’s been long,” Rosado said. “When I first auditioned, I was hoping for the Principessa role, but then I got the Zita role, and I was really surprised. So it’s been hard work, but it’s been rewarding.”

Rosado said she had to do a great amount of preparation for the roles because they are so contrasting. Rosado said Principessa is a much more serious role than Zita. However, she said preparation for Zita was more challenging for her because she’s never been in a comedic role before.

“One is very dark — she’s just forever upset, I guess,” Rosado said. “And the other one is lighthearted, and even though she thinks herself to be very proper, she ends up being very funny. It’s good once you get it, once it’s ingrained in you, then it totally makes a difference.”

The cast consists of several international students as well. Stevens said as an exercise, a trio of women would sing in their native language, so at one point, there was someone singing in English, Mandarin Chinese and Spanish.

“We have a lot of people who speak different languages and are from different countries,” Stevens said. “I love working the opera, because I love working with people from such different backgrounds.”

“It was not very difficult, because I’d been studying as much as I could,” Ort said. “I’ve been supplementing my own voice teacher for four years in opera. It wasn’t this brand new thing.”

Ort said preparing for this opera is different than preparing for a musical, because show tunes are more open for interpretation than traditional opera music.

“This is music first, forever and always,” Ort said. “Depending on the musical, I go for character first and analyzing how a character fits with everything else in the show. In musicals you can play with the music sometimes. The rhythms aren’t always, like, you have to do it this way.”

Harmantzis said he has grown as a performer from being in “Gianni Schicchi” because he’s had to act more. Harmantzis performed in “L’Orfeo” and “The Magic Flute” his sophomore and junior years. He said each year the level of acting grows and grows because he needs to dissect the character further. In “The Magic Flute,” he said he felt he needed to pay more attention to his vocals, but in “Gianni Schicchi,” he said he needs to concentrate on his acting.

“This is the most challenging role I’ve done so far,” Harmantzis said. “And just every year, there’s more asked of me from the acting perspective. This year it seems more like focus on the character more and what’s going on around me.”

Ort said she loves the opera because of its cohesiveness and its talented cast.

“It’s a great ensemble, and I think you’ll find that the actors, the singers are really playing off of each other and really creating a whole world in which we live. There’s no disconnect. The show is very cohesive and beautiful and hilarious.”