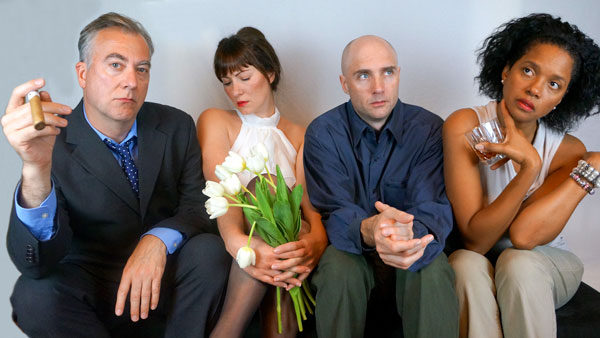 Silence fills the room after the tulips are furiously torn from their vase and hurled. Their petals explode from their stems, and the air is thick with an uneasy suspense. The night was past salvaging; the evening had become a whirlwind of angry gazes and scathing curses.

Yasmina Reza’s “God of Carnage,” a 90-minute theatrical production, delivers the intense conflict its title promises. The show peeks into the window of domestic life as it focuses on two couples locked in a battle of pride when their sons get into an altercation at school.

From Nov. 15–17, The Readers’ Theatre will perform a staged reading of “God of Carnage” at the Black Box Theatre at Lehman Alternative Community School at 111 Chestnut St., allowing theatergoers to experience the mayhem themselves.

The single-act play stars Cynthia Henderson, associate professor of theater arts, as the melodramatic Veronica, who with her husband Michael (Tim Perry) invite neighbors Alan (Scott Whitham) and Annette (Darcy Martin Rose) to their home to discuss a fight between their sons. Before the events of the play, Henry, Veronica and Michael’s 11-year-old son, got into a tussle with Benjamin, Alan and Annette’s son of the same age. The fight left Henry with missing teeth, and the parents asking questions. The play begins as the two couples sit down, and what starts as a night of mature reconciliation spirals into chaos.

From the outset, there’s a palpable tension as the characters interact, each butting heads with the others as they attempt to cooperate. In particular, Alan, a lawyer who lives in the few minutes between phone calls, repeatedly earns eye rolls from the rest of the cast as he barks into his cellphone, hindering any conversation between the couples.

This does not disqualify the others from being equally obnoxious; each of the room’s occupants are quick to deliver jabs at personal characteristics, keeping both the audience and characters on their toes.

Ultimately, frustrations boil over, libations are poured and tears are shed. By the end of the play, an empty bottle of rum lies on the floor, and any civility between the two couples has vanished. All of this plays out in real-time as viewers witness countless conflicts develop between the characters. Rose said the absences of an intermission benefited the acting process.

“In some ways, I think it’s easier than having five minutes when you’re offstage,” she said. “It takes a lot of the backstage work out of it.”

The pacing of “God of Carnage” is relentless. As conflict quickly escalates to hysteria, each of the characters bounce between a myriad of emotions. Whitham said having to quickly switch between mindsets proved to be the cast’s biggest challenge.

“There’s a lot for all of us, the velocity of this thing really starts to pick up,” he said. “We’re laughing and crying and fighting very quickly.”

Henderson said she also had to tackle her character’s tumultuous emotions, which fluctuate between devastation, manic laughter and rage. She said as she rehearsed, she had to make a conscious effort to keep up with Veronica’s persona.

“There are moments — especially during the rehearsal process — where I forget I’m supposed to be crying right now,” she said. “And then the next second she’s laughing hysterically, and then she beats up her husband, and then she’s crying again.”

Despite the difficulties, the actors found satisfaction in portraying these frenetic personae. Reza’s script is rife with scalding dialogue, and Rose said she found enjoyment as the chaos built.

“It is kind of invigorating though, as an actor, to be a part of a show that ends in such chaos, to play with that,” Rose said. “It is kind of fun to be at the end, throwing stuff and cursing at each other.”

Anne Marie Cummings, artistic director and The Readers’ Theatre founder, said she encourages both theater-enthusiasts and those less versed with stage productions to attend. She said regardless of one’s theater knowledge, “God of Carnage” will prove a supreme theater-going experience.

“Anybody who loves theater, or anybody who doesn’t love theater, they can be assured that [they] are going to be stepping into an environment where they are going to see a brilliant play,” she said.