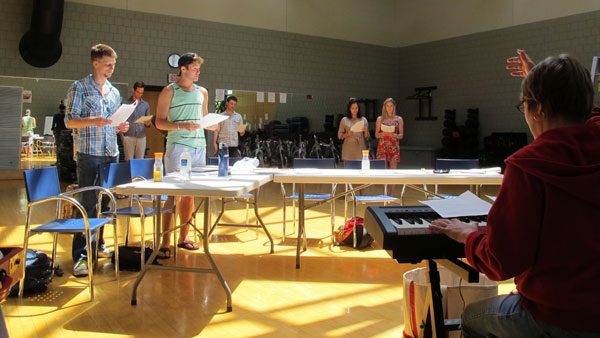 Frederick Douglass and William Lloyd Garrison parted ways in 1855 because of ideological differences regarding the abolitionist movement. Douglass left The Liberator, Garrison’s newspaper, to create a new publication, The North Star. Wendy Dann, assistant professor of theater arts at Ithaca College, is now bringing the story of their falling-out to the stage.

Over the past four years, Dann has been developing “The Liberator: a play with music and machinery,” which depicts the friendship and eventual rivalry of Douglass and Garrison. Though the play is not yet finished, Dann went to New York City in February to further develop it. She also held a workshop in July on the college’s campus and featured six students from the college and two alumni in the Ithaca workshop cast.

Thomas, played by senior Ashton Muniz in the Ithaca workshop, becomes an apprentice to Garrison in The Liberator’s office. Dann said as Thomas switches between both The Liberator and The North Star once Garrison and Douglass split, he offers the audience a glimpse into the world of both papers and their political views on abolition. The plot revolves around Thomas’ struggle with his conflicting opinions regarding the ideologies of both papers.

Dann said she first became inspired to write a play about Garrison and Douglass’ story five years ago after her father told the story to her during a long drive up the East Coast. Dann’s father and her step-mother are members of the historical society in their town and own original copies of The Liberator. They currently live in the house of Gerrit Smith, a major benefactor of the abolitionist movement, in Peterboro, N.Y.

“I’ve always been interested in exploring our curious history with race and how it informs our daily relationships,” Dann said. “[My dad] told the story of William Lloyd Garrison, and I just got hooked.”

To prepare for the five-day workshop in July, Dann gathered a group of students and alumni to serve as the cast. Among the eight cast members was senior Joe Pietropaolo, who played a member of the chorus, a group Dann calls “The Mechanics,” to represent the mechanical sounds in the printing room.

Pietropaolo said the play impressed him from the beginning because of the drama and excitement written into the story.

“From the get-go, I thought the script was awesome,” Pietropaolo said. “I couldn’t believe that she had put this together, because it really jumped off the page.”

The main focus of the Ithaca workshop was to figure out how to incorporate The Mechanics, played by Pietropaolo and others, and new music elements into the play. Though “The Liberator” is not a musical, Dann brought in longtime friend and colleague Sarah Pickett, assistant professor of sound design at Carnegie Mellon University, to compose a score to accompany the play. Pickett said the function of the score is to mimic the sound of Garrison’s printing press.

“It’s sort of a fusion hybrid between a minimalist, industrial feel with some gospel elements,” Pickett said. “It’s still in process, because I still have a bulk of the music left to write.”

The intended result for the score is to create the illusion of a machine using The Mechanics as a Greek-style chorus. Dann said The Mechanics use vocal sounds and metal objects to complement the setting for the play.

“They make that kind of percussive sound with found instruments, objects and metal things,” she said. “So there is kind of a running score, but we wouldn’t call it a musical because it’s really all about the text. It’s more intoned, chanted … not really sung or melodic.”

In addition to the past workshops, Dann said she’s tentatively scheduled another workshop in January at Carnegie Mellon in Pittsburgh. She has also begun collaborating with Breaking Bread Theater in New York City to produce a staged reading of the show. Breaking Bread is a theater company that strives to help new writers and talent workshop their shows. Dann, a founding member of the group, along with Joe Calarco ’92, Jen Waldman ’97 and Steve Pacek ’00, said she hopes the staged reading will help jumpstart the play’s production process.

“My ideal dream would be that an artistic director of a regional theater might see the reading that Breaking Bread produces in New York and decides to produce a full production of it,” Dann said.

Dann said she and Pickett will only work sporadically because they teach throughout the semester. They will resume working over winter break before their workshop in Pittsburgh.

Dann said she hopes the play contributes to educating the audience about the media’s role in the abolition of slavery in America and its relevance today.
“I think everyone in the abolitionist movement should have a play written about them … they’re amazing people,” Dann said. “My hope is that the audience is engaged … and that they not only learn something about their history that maybe they didn’t know, but that they also see reflections of now.”