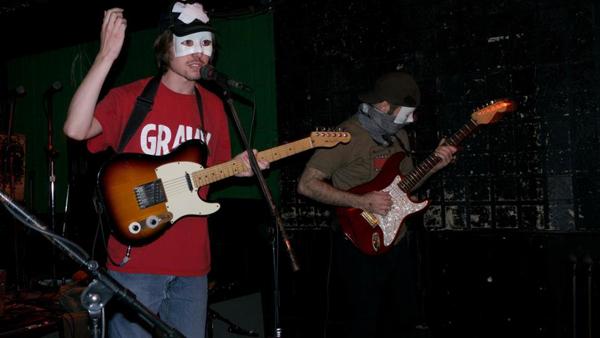 Music fills a garden apartment. Sitting around a table, guitars in hand, two musicians belt out the upbeat “Pumpkin Boy Races Against Dr. Cornsnake (For the Fate of the World),” the first track off their newest release. Smiling as they go and mulling over minor mistakes with laughter, the two are perfectly in synch as they play.

The group is Unicorn Harvest, a two-piece rock band composed of Ithaca College students that just barely fits into the rock genre. With elements of metal, ’80s rock and a bit of funk, the group has developed a sound all their own.

Unicorn Harvest has been active for just shy of a year. In October, the group released a nine-track album, “The Bone Toes,” which fans can download for free off of their website.

For Isabella and Simons, Unicorn Harvest is not their first foray into music. The two are members of The Yips, another student-led band, so music proves to be a significant aspect of their friendship, Simons said.

“Before I even knew who [Isabella] was, our bass and drum playing just locked in really naturally,” Simons said. “I saw he had a really unique style, and from that point we just developed a personal relationship.”

However, junior Rachael Lewis-Krisky, a friend of the band and Isabella’s girlfriend, insists the connection between Isabella and Simons goes further than just the music.

“They both just have these brains that are able to think in a way that no one else can think,” Lewis-Krisky said. “They just think differently — it’s a good thing.”

The lively, eccentric and thoroughly “out there” sounds of the group back up this claim. Isabella and Simons said they take inspiration from a wide array of artists, crediting Weezer, Frank Zappa and Yes, among others. Isabella said Unicorn Harvest intends to push the envelope.

“Music is not exciting unless you push the limit,” Isabella said. “We wanted to challenge people’s ears. We wanted people to listen to our songs and go, ‘What?’”

The two members take this philosophy to heart — their music is full of peculiar contrast, dancing between heavy riffs and whimsical jigs. Junior Brendan Duran, bassist for campus band Gypsy Gets Shotgun and live bassist for Unicorn Harvest, reckons the sound will benefit rather than hurt the group.

“The aspect of it being so different, so wild and crazy, it’s just like, ‘Whoa, this is something I’ve never even come close to thinking about,’” Duran said. “I’d say we’ve got that going for us.”

The pair plays in disguise, wearing white masks and taking on alter egos as they do it.

Not missing a beat, Simons said, “So we ‘Russell people’s Jimmies.’”

Isabella and Simons are unconcerned with accessibility. They said they are making the music that they, as musicians, want to hear. Simons said this philosophy is a critical aspect of the group’s mentality.

“We just like doing the music we’d like to hear as listeners,” he said, “That’s always been my mindset for things.”

Isabella said he takes pride in sticking to a sound that is true to the band’s intentions.

Lewis-Krisky said there is genuine, creative chemistry between the two musicians.

“They’re really doing something because they feel it, they really feel it,” she said. “When they play, you can see it in their hearts.”

Looking to the future, the members of Unicorn Harvest have plans for a new release that they said will arrive next semester. Duran said he expects good things from their new release.

“They’re coming up with some new stuff that sounds awesome,” Duran said.

At their core, Isabella and Simons said they merely desire to elicit feedback from listeners, and with their eccentric style, Isabella embraces any response to their music.

“I want people to either hate it or love it,” Isabella said, “Because if they hate it, I did my job. It’s better than people say, ‘Meh’, because if they say that, then it didn’t affect them.”