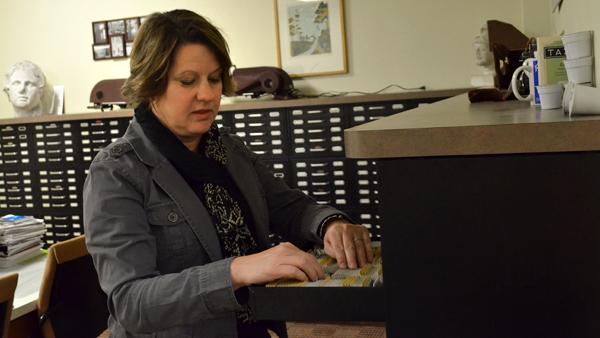 Before video projectors and Google image search, the only practical way to show art to students was through slide projections. Now that the technology is rarely used at Ithaca College, the Visual Resources Collection has been undertaking a six year clean-out of all their slides. Out of the original collection of 160,000, only 60,000 will be kept for research purposes.

Instead of disposing of the rest, the VRC and the Handwerker Gallery are organizing a show titled “Turn up the Transparency.” The show, which is currently accepting submissions from the Ithaca College community, will be featuring artwork utilizing the deaccessioned slides. Visual Resources Curator Randi Millman-Brown said the idea was taken from a similar event at Eastern Michigan University.

“I just thought, what a great idea to do something clever, talking about getting rid of slides but not throwing them away, so reusing them and being a green project and doing something creative with this medium that is no longer being used’,” Millman-Brown said.

The content of the slides features work from varying artists and covers media like architecture, paintings, sculptures and decorative arts. The wide-ranging subject matter will certainly challenge many of the artists participating in the show, Millman-Brown said.

This is something Thomas Burch, assistant professor of theater arts, is hoping for. After learning of “Turn up the Transparency” through Intercom and speaking to Millman-Brown, he brought up the exhibition to his Introduction to Theatrical Design and Theatrical Design I: Scenic courses, because the work they are doing in class coincides with what the exhibit embodies.

“We are dealing with all sorts of those basic concepts of art, color, texture, line, mass, form, composition, harmony, balance and those kinds of things,” Burch said. “I realized in creating a piece of art out of these slides, it is very much the same set of concepts we are dealing with in both classes.”

He said he hopes they will put their best effort forward to put the concepts they are learning in class to the test. Doing so, he said, will help them understand the course material much more fully.

“I figure that if students take the time to see these slides to look at them, to actually embody something about them on an emotional or theoretical plane and create something out of them, they are automatically reusing the same concepts but in a different format for the project,” Burch said.

Freshman Jeanine Varilla was one of the first to sign up and take a bag of slides home. After getting an email about “Turn up the Transparency,” she went to the VRC room to learn about the exhibit. Varilla said the most intriguing part about the event is the concept of bringing together art from across almost every discipline.

“All the slides that they threw out were artwork that in a different context has different meaning,” Varilla said. “But if you combine those artworks to make another artwork, the meaning completely changes.”

Millman-Brown has not seen any works in progress or completed submissions yet. She said the multitude of directions the new artwork can take excites her.

“I’m just looking for people to be creative,” Millman-Brown said. “It would be nice if people addressed the idea that this is a kind of older technology of image use and how people learned art history when everybody had to use slides. There were no other means of projecting images other than slides. It could be a piece that is reflective of this older format. Until I see what people submit, I have no idea what we are going to get.”

The deadline for submissions for “Turn up The Transparency” is Nov. 1. Anyone interested in entering a piece can obtain a bag of slides in Gannett 122.