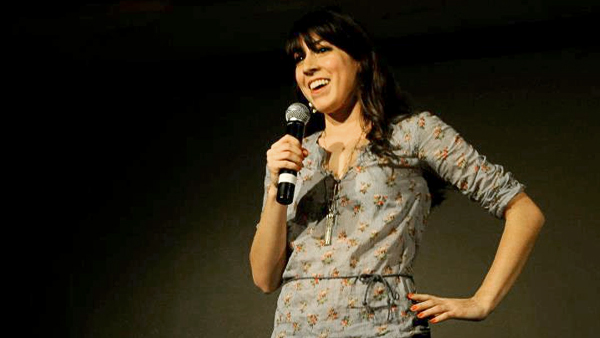 Courtesy of Alyssa Onofreo
Senior Alyssa Onofreo during one of her IC comedy club sets. She has been a member of the student organization since her junior year.
By Nicole Arocho — Staff Writer
Published: September 12, 2012

Sitting on her couch, a giddy senior Alyssa Onofreo makes her friend read a text she plans on sending to a guy she likes.

While she waits, she checks his Facebook, finds a wall post of another girl, does crunches to boost her “hotness” and shortly retires to her couch.While whining “text me” to her phone, Onofreo changes position on the cushions every few seconds, only to fall asleep when her crush responds back. She immediately wakes up and turns on her phone.

“Oh my God he’s the best!” she thinks to herself after reading the short text.

Onofreo’s YouTube video “What Girls Do When They Like Someone,” featured on her page “omgchomp,” was recently featured on CollegeHumor, a website dedicated to funny videos made by college students.

While interning at Geek and Sundry, a commercial comedy YouTube channel, Onofreo began to receive congratulatory texts from friends about her video being posted on CollegeHumor. Onofreo could not contain herself.

“I did a happy dance that freaked out the other interns,” Onofreo said. “I had to stop myself from screaming or dancing some more.”

Once the “weird fangirl” of IC Comedy for two years, Onofreo has been an avid member of the club since her junior year. Now she makes thousands laugh on her YouTube channel and has more than 700 subscribers. Recently, she received a check from Google for more than $100 from the advertisements in her videos.

Last January, when Onofreo interned for Comedy Central in Los Angeles, she wanted to communicate with her family and friends. However, there were many time zones to Middlefield, Conn. As a result, she started to post videos on YouTube of her daily events to keep in touch with her relatives.

After a while, she began to develop sketches and post them on her YouTube channel. Slowly she developed a following. It wasn’t until her breakthrough on CollegeHumor that she reached 10,000 views.

Onofreo admitted she feels more comfortable doing videos of her sketches and posting them online than doing stand-up and improv comedy. At her first stand-up set, she said her nerves took her over.

“Two minutes into the show, I forgot all my jokes. I panicked,” she said. “One of my friends had to yell me my jokes so that I could actually make people laugh at the jokes, not at myself. It doesn’t get more awkward than that.”

Onofreo admitted she always laughs at her own jokes — more than her peers do.

Junior Talia Koren, Onofreo’s fellow IC Comedy Club member and friend, said Onofreo is more comfortable posting her comedy online because she doesn’t have to deal with the pressure of a live audience.

“There’s a certain anonymity [to YouTube] because you don’t have to see the people that watch,” Koren said. “When you’re doing stand-up, you’re much more vulnerable.”

During her internship at Comedy Central, Onofreo watched show pilots and evaluated them. She read manuscripts and participated on “pitch day,” the big meeting where staffers give their opinions of the shows and manuscripts that have been assigned for the week.

Onofreo also took improv classes at the Upright Citizens Brigade in the spring. Before she left Ithaca College last semester, Onofreo said she had heard of regular comedy shows at UCB from her friends. In one of the shows, there was a sign promoting improv classes at UCB. Motivated by her “Writing for TV” teaching assistant, she signed up online.

“In the classes we learned a ton of improv games that helped us learn how to be better [in comedy],” Onofreo said. “Eventually, we started running our show during class.”

The class was very experimental. It was mostly a hands-on experience that prepared Onofreo for the big show at the UCB theater, she said.

“Before I took them, I knew about improv and stand-up comedy, but I didn’t know about how they really work,” she said. “You know what is funny, but you don’t know why it is funny.”

“Alyssa is a very smart and funny young woman,” Ginsberg said. “Her comedic ability is very natural, and she is well informed of comedians, both on the Internet and on TV.”

After graduation, Onofreo plans to move back to L.A. She said she wants to continue comedy classes at UCB. She plans on taking serious time to work on her character.

“I want to be right there,” Onofreo said. “Where comedy happens every day.”