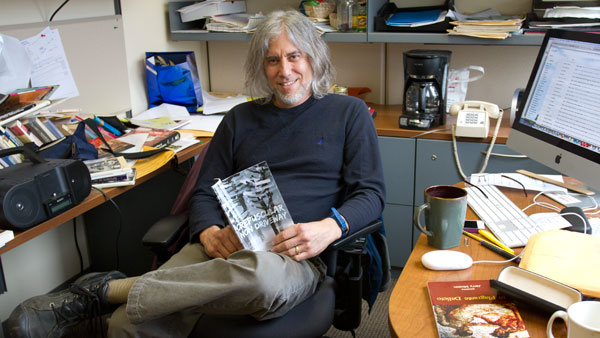 On April 17, Jerry Mirskin, associate professor of writing at Ithaca College, released “Crepuscular Non Driveway,” his third collection of poems. His first book of poetry, titled, “Picture a Gate Hanging Open and Let that Gate be the Sun,” published in 2002, won first place in the Mammoth Books Prize for Poetry. Mirskin was also the 2012 winner of the Arts & Letters Prime Poetry Prize.

Accent Editor Evin Billington sat down with Mirskin to discuss his collection, his writing process and his influences.

Jerry Mirskin: I like to drink coffee or make tea. I like to have a dedicated time and place. So usually, even though people think that poets are motivated by inspiration, which is somewhat true, it’s more often a result of regular work. Continuity: The more you get into a regular rhythm, the more things happen … I usually try to work in the morning … and try to maintain a kind of continuity, because then you’re kind of working on things subconsciously. Then your writing becomes sort of a partner to your reality, in a way. I usually try to write five days a week, especially when I’m working on a project. It was an interesting thing because when you finish a book, they call it a book release, but you’re also kind of released from the things you had been doing. Then you can have this moment to sort of pause and think about what you want to do. So I’m sort of in that cool state to think about doing something slightly different, but still I’m writing. I’ve tried in the past to do other forms, like fiction and playwriting and screenwriting, but I always sort of bounce back to poetry for some reason.

EB: What do you like about poetry over other mediums?

JM: I think for me, it’s just a good fit … I find in poetry things that were being expressed that I only intuited, and I said, ‘Wow, I had an inkling or a vague sense of something, and now others are finding the words to express that.’ I thought that was very cool. For me, it feels like a natural form of expression. Poets are very close to personal essayists and memoirists and are usually writing from their own experiences, and I like to do that. I can dwell for long periods of time in memory and in reflection. I find it very soothing or settling or consoling.

EB: Is reflecting on your past a large element in your poetry?

JM: A lot of the poems in my new collection … one of them is about ninth grade and stuff that happened when I was a kid. But then there are some poems that just have to do with my present life in relationship to others, which I’m interested in.

EB: How did you come up with the title?

JM: The title … well, I’m a little immature. So the title refers to a poem where my neighbor didn’t want me to play music in my driveway. So I was casting a kind of Harry Potter–like spell. So it’s kind of a mock Latinate expression. “Crepuscular Non Driveway,” the moment of the event I was describing was at twilight, and part of the poem is about not being able to come up with the right response in the moment. And I’m trying to respond to my neighbor, and I’m trying to think of the word, and then I have this wish. I like it because it seems sort of emblematic of what I’m doing in the whole book, which is trying to adjust a kind of regard in response to others.

EB: What is your advice for aspiring poets at Ithaca College?

JM: I think that writing poetry is a craft, so that means it’s a matter of perseverance in a way in that if you stay with it, usually things happen. I think people who want to be poets — I think everybody has a desire to do some form of art — to have some sort of expression. Poetry isn’t for everyone, but some find that it is. People who discover it, I don’t know if they need any advice. I think it’s, as a craft, a kind of practice, and if you maintain that continuity that I was talking about, then things start to happen. I would say if I have some advice, read this book, because this tells you to do it. I would say read a lot.