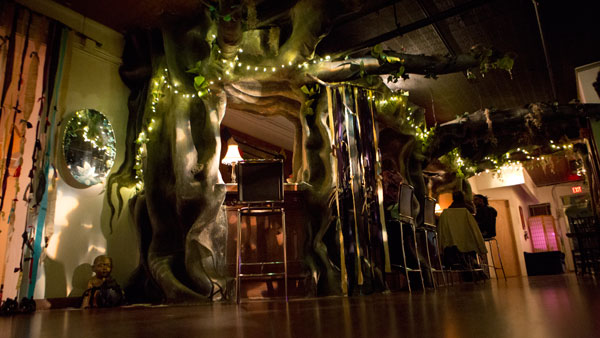 Senior Samantha Towle sits in the nook of a wooden bar that is wrapped in gnarled tree roots that climb up to leafy limbs lining the ceiling of the Mystic Water Kava Bar & Yoga Studio. Soothing music and quiet conversation lend lulling background sounds, while dim lighting and flickering candles add to the peaceful atmosphere. In front of Towle is a small, hollowed-out coconut filled with kava, a traditional Pacific Islander drink believed to have relaxing properties.

Paul Galgoczy, who owns the kava bar with his wife, artist Judith Galgoczy, pours himself a coconut shell full of kava and joins Towle, instructing her to clap twice and say, “Bula!” before drinking the cloudy liquid. He also suggests that she finish the shot by clapping once. The word, “bula,” is a Fijian chant meaning “Love to the heavens, love to the earth and love to your higher self.” The claps are part of a ritual to disperse negative energy for the drinker.

Two loud claps followed by an enthusiastic “Bula!” and Towle has finished her first kava shot. The liquid is smooth, but the taste is undeniably earthy. Her tongue feels tingly, then slightly numb because of the anesthetic nature of kava. She takes another shot, then chases it with a slice of pineapple to cut the taste of the kava, which she equates to the flavor of wet leaves and twigs. By her third shot, the strong earthy taste has diminished. She is relaxed but not drowsy, clear minded and focused. Her body’s muscles are completely relaxed, and she feels completely calm but alert.

“As a person who’s not into the crazy party scene at places like Moonie’s, I really liked the calming and chill atmosphere at the kava bar,” Towle said. “I like that there’s a way to have a ‘drinking’ experience without having to drink alcohol.”

Kava is made from root of the Piper methysticum, or kava plant, and has been used in the South Pacific for centuries as a traditional drink. At Mystic Water, the root is blended daily with water to form an all-natural substance that promotes physical relaxation without a loss of mental clarity. The Galgoczys, who import the root from the South Pacific, make a fresh batch every day. They also make flavored versions ranging from apple-cider kava to carob-and-honey kava. The increased mental focus also includes increased awareness of senses, which is why the bar is so dim — kava can increase sensitivity to light.

According to Paul, the drink also has a reverse tolerance effect, which means the longer and more often patrons drink it, the less of the actual kava they will need to drink in order to feel its effect, which is in direct contrast to alcohol consumption. 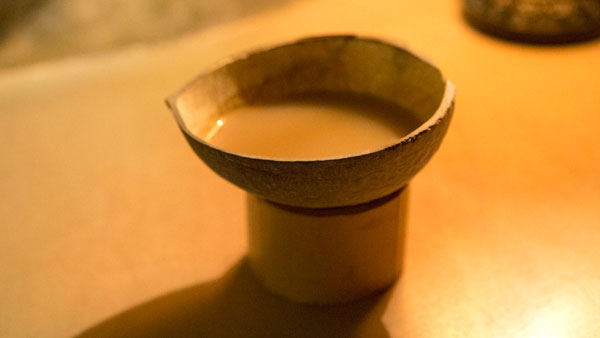 Kava is a plant Mystic Water imports from the South Pacific, and the drink is served in a hollowed-out coconut.

The Galgoczy couple opened the Mystic Water Kava Bar this summer, following the successes of Judith’s family-owned kava bars in Hollywood, Fla., and San Diego. The bar is one of about a dozen kava bars that have opened in the U.S. The limited number is because of the difficulty in getting the kava root.

The kava bar is connected to a yoga studio, which offers weekly classes and wellness workshops that focus on topics like spiritual health and soul searching. For Michelle Csonka, a kundalini yoga instructor and life coach who teaches classes at the studio, practicing yoga and drinking kava seemed to be a natural pairing.

“Practicing yoga is always beneficial,” Csonka said. “It is a way to connect with the self and generate relaxation, peace and an inner stillness — the reasons to drink kava are similar.”

Mystic Water also offers occasional live music and participates in the Downtown Ithaca Alliance’s First Fridays — the installation currently on exhibit is of Judith’s own art work, a series of self-evaluating portraits that combine text and images. The variety of options for engagement, including art, music and socializing over cups of kava, provide plenty of opportunity for community interest.

“It’s a place to talk and socialize and mingle — a really diverse environment,” Judith said. “We are trying to create a sense of community. We want everyone to feel welcome.”

While kava can aid in de-stressing after a long day, it should not be mixed with alcohol, a warning that is strongly stressed at Mystic Water.

“Kava enhances your awareness, while alcohol dulls your senses — they’re conflicting and at odds,” Paul said. “Putting them together will make you sick.”

There are concerns, however, that kava may contribute to liver damage. In 2002, the Food and Drug Administration issued a consumer advisory that there is “the potential risk of severe liver injury associated with the use of kava-containing dietary supplements.”

For senior Michela Moe, kava provided an excellent option to socialize with others during the summer, even though she was not 21 years old yet. Though she is now of legal drinking age, she still appreciates the unique experience Mystic Water provides.

“I really wanted to try kava because I heard it was similar to alcohol, but without the loss of mental clarity,” Moe said. “So often when you are drunk, you make stupid decisions, can’t text properly and are, overall, a mess. However, when drinking kava, you get the same loose, ‘airy’ feeling, but with mental clarity.”

For Towle, the benefits of kava lie within the peaceful atmosphere and calming effect of the drink. She plans to frequent the bar for the rest of the year.

“I’m a senior double major taking 18 credits this semester,” she said. “I need a way to relax but still be able to work and focus – kava does that for me.”