A blast from the past (in French)

Sound familiar? Those are the lyrics to “La Vie En Rose,” the popular Edith Piaf classic that almost perfectly captures the very heart and soul of France. In the 1940s, that song graced concert halls across the world as Piaf toured, spreading the wistful sounds of Parisian streets to the masses. It inspired countless renditions by artists such as Louis Armstrong, Grace Jones and Donna Summer. But for me, the rendition that hit closest to home was the 2007 film of the same name as the song, starring Marion Cotillard (Nine, Public Enemies, Inception). 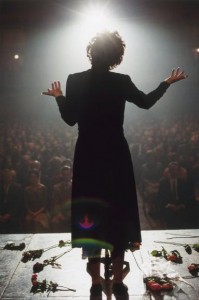 I revisited the trailer for the film today and remember the time I watched it back in 2007. It was the summer before my senior year of high school, I was in my friend’s basement den on a huge couch with four other friends of mine. While huddled under a large comforter — yes, we were close drama club buddies — another friend came charging through the side door, brandishing a DVD fresh from Blockbuster. Despite from the general excitement that sparked around me when people started noticing what movie my friend picked, I knew deep down that I did not want to watch this film.

“Why are we watching this?” and “Is there anything in English we can watch?” were just some of the strings of questions I spewed as they readied the DVD player. But the movie started … and I stopped. For the next two hours I watched what I still consider to be one of my favorite contemporary foreign films and quite possibly one of my favorite films period. The movie chronicles Piaf’s troublesome life and career, highlighting the ups and many downs she experienced.

Cotillard is a hidden gem of an actress who embodied every cycle in Piaf’s life with precision and commitment. So with all that said, if you haven’t seen “La Vie En Rose,” take some time this week to watch it and get a little blast from the past … even though it’s only been out for three years.