A Seat-Full of Sugar Makes the Medicine Go Down? 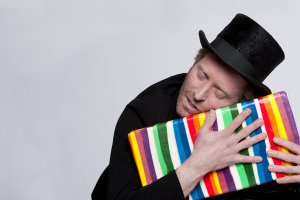 This question, if answered yes, can turn any ordinary object into extraordinary, upping the cool factor by at least ten points. The case is no different with the “Sugarchair,” a strange innovation by an even stranger designer, Amsterdam’s own Pieter Brenner. Yes, the chair is made entirely of sugar. Yes, you can eat it. I do give the man props for the design — he had to do all sorts of scientific things with proteins and other stuff I know very little about to make such an intricately colored, totally edible chair with 60 pounds of sugar. I also admit that his whole philosophy of thinking outside the box is encouraging. So let’s get the applause out of the way. OK, moving on. 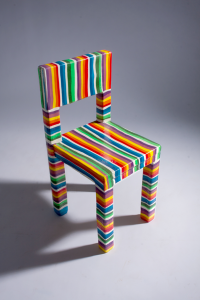 But here’s where I can’t stop myself from raising a few gentle questions — questions none of his numerous interviews seem to be able to answer for me.

The website introducing Sugarchair features a series of disturbing images of a man (Brenner) in Willy Wonka-inspired attire hugging the Sugarchair with an expression of what I’m tempted (and disgusted) to call lust. OK, fine, your chair is cool. But explain this to me, Brenner — what happens after I lick your chair? It’s going to be sticky, isn’t it? It’s like when a child licks a lollipop, and then decides to save it for later by putting it in his or her pocket. When the child comes back to the lollipop, it no doubt has lint or other fuzzy stuff stuck to it in the place where it had been previously licked. So if I lick my new sugarchair, and then sit on it, won’t my jeans leave their denim-y debris all over my chair? How am I supposed to sit on that sticky mess? I guess I just don’t understand the practicality of such an item. Sure, it’s delicious, but it’s deliciousness inhibits it’s functionality and overall chair-yness, and vice-versa. It’d be one thing if he was saying this piece was purely for art and design purposes, but he’s actually encouraging people to lick it… So riddle me that one, Mr. Brenner, riddle me that.

To top it off, this sticky sweet item is rumored to be selling for over 7000 pounds across the pond. Why would I want to pay that much money for a chair I can barely use if I want to eat it? And then, once I eat it, it’s gone! Sounds like a rip-off to me. A tasty one, but still a rip-off.