A Vow of Silence

A marcher named Sean took a vow of silence at the start of the march. Her original intention was to march the entire 3,000 miles, from LA to DC, in complete silence. She recently ended her silence early, as she needed a change in energy, but she and another silent marcher, Mack, asked the marching community to take shifts with silence. The purpose of constantly having someone silent on the march is so we can represent those who have no voice in this issue.

It is my turn to carry this torch. Ben just finished his 10 day silence, and in his place I will be silent for a week (at least that’s what I’m thinking now). Earlier in the march, before I was here, the marchers organized a week of actions that anyone around the world could participate in to show solidarity with the Cowboy and Indian Alliance. The Alliance camped out in D.C. for about a week to demand climate action. One of the daily actions was a day of silence, which I partook in. I really enjoyed it, and all of my friends were impressed, but it was really hard and I slipped up a few times.

Despite the difficulty of the task, I was particularly inspired to do this after yesterday’s march, in which we witnessed a concentrated animal feeding operation. We walked by another one today. 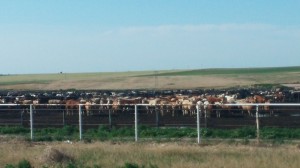 They are overcrowded, do not have much space to move in, and are standing in deep mud and manure. 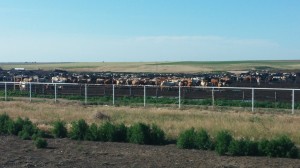 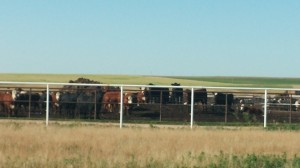 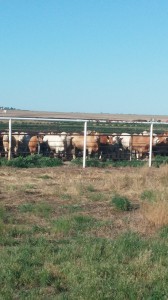 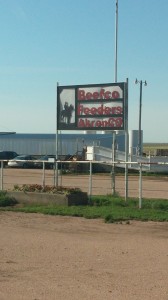 I wanted to share the following announcement I wrote out and asked Ben to read to the marching community over dinner after he broke his silence and I began mine:

“Tonight I am taking over Ben’s silence in order to continue the Climate March’s recognition and support of those who have been affected by climate change and industry but have no voice to defend themselves with.

I decided I was ready to take on a silence shift as soon as possible after seeing a concentrated animal feeding operation in person today. I have been a humaneitarian (someone who only eats humanely raised and organic meat) for around four years after watching video footage of what goes on in factory farms. But I have never seen one with my own eyes. I’ve been keeping count, and over the last two days I’ve seen over 100 cattle trucks on the road, and now I know where they were going.

I think witnessing such an atrocity is a great way to inspire voluntary simplicity and self sacrifice. Those cows are herded into those trucks and trapped in the misery of factory farm in a way hauntingly similar to the Holocaust. And for what? Our luxury. Not only are we tormenting animals for the sake of our taste buds, the process of raising them is horrifically unsustainable and contributes to global climate change.

Let us remember those who suffer as we eat our meal tonight. Let us remember our privileges, even as we are living with less on the Climate March. We are still better off, we still have luxuries and comforts. Although not all of us on the March agree, I think we still have too many luxuries.

Let my silence remind us of those less fortunate, of our Mother Earth who suffers while many continue to believe she is not alive, that she is not a true force, and that she does not deserve respect.

I will communicate only through writing. To me this means pen and paper, no texting. I will, however, continue to blog and use social media in order to advance the Climate March’s cause. I will also continue to sing, much like Sean did. I believe singing is a truer representation of the soul’s intentions than words.

Thank you for your support.”