All That Jazz royal wedding roundup 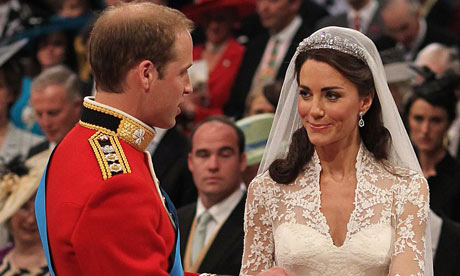 Yesterday was a day unlike any other. Hundreds of thousands of people from all over the world gathered in Hyde Park, outside Westminster Abbey and in pubs, homes and venues across London to celebrate the wedding of Prince William and Catherine Middleton.

After several months of buildup, the two are bound together as husband and wife. I spent my day mostly in Hyde Park interviewing people for The Associated Press’ extensive arsenal of wedding round-up stories. As the day went on, I got calls from the AP London Bureau with different topics and people to find in the crowds for interviews, so to say it was a busy, hectic day would be a huge understatement.

With confetti spouting out onto the crowd as Will and Kate exited the Abbey as a royal couple, crowds cheering and waving their union jacks with pride and everyone coming together amid all the catastrophe and confusion in the world, the day was a right royal success.

Here’s a breakdown of some of the most interesting aspects of the pomp and pageantry that went down in London yesterday:

All eyes were on Kate as she exited the Rolls-Royce Phantom and stepped gracefully into the Abbey wearing a stunning lace embroidered gown designed by Sarah Burton. The Dress, as many have cheekily referred to it in the past months, was a vision: beautiful ivory and white satin and a very appropriate train (not too long and not too short). Other guests at the wedding wowed viewers with their dramatic fascinators, especially Victoria Beckham, who wore a posh Philip Treacey hat that complimented her loose blue ensemble. No smile from the former Spice Girl, though.

This wedding was watched by billions of people across the world and the BBC, who got top billing for video coverage of the event, gave its audience a glimpse into other wedding celebrations taking place in other countries. But no celebration could top what was going on in London. Throughout the streets, parties were set up with British flags waving over sidewalks and thousands of people gathering to witness the occasion. The scene outside the church was vibrant even before the wedding as tourists, journalists and locals camped out in the cold to wait for the big moment. Circus is the first descriptive word that comes to mind.

Thousands of journalists descended onto London to cover the royal wedding, which proved to be not only a financially beneficial event for the media (big events mean big ratings), but one that lent itself to a deviation from the regular gloom and doom around the world. Though sometimes news media tend to overkill and completely ignore other happenings in world when events like this come up, newspapers and websites did a decent job of keeping their content varied even though the wedding of the decade was going on. News doesn’t stop when a prince gets married to his princess and future queen, so the media shouldn’t either.

Where were you on the big day? I know that a lot of dedicated people got up early in the states to witness the wedding. Were you one of them?