My changing ideas about becoming a mother

This blog post is about reproduction, overpopulation and climate change. All three are topics our society needs to become more comfortable with talking about. In the spirit of being more comfortable, I’m going to discuss a personal decision I made, openly, for everyone to read.

I grew up an only child, and I remember sporadically wishing out loud for a little brother. My parents never granted my wish — they ended up divorcing when I was 12 — but they did an awesome job with raising the one kid they did have, even after they split up.

From a young age, the kindness and devotion my parents gave to me inspired me. Like young girls often do, I planned how many kids I would have and what I would name them. While my opinion on baby names has changed over the years, one thing has always remained certain; I want to pay the love my parents showed me forward to a child.

My participation in the Great March for Climate Action over the course of five months changed my thoughts and perceptions on a lot of things. One thing I didn’t expect it to change was my firmly held plans about motherhood.

It happened back in September, on our bus ride from Ohio to New York City to take part in the massive People’s Climate March. On the bus, we watched a documentary called “Planet Ocean.” The film showed how humans have and are dismantling everything nature created, with a focus on the oceans. There are fishing nets in use that are 25 miles long. Bluefin tuna are expected to be extinct soon. Jellyfish are taking over the waters because we have removed their predators. That doesn’t even scratch the surface.

Earlier when we were in Indiana, I walked a 25-mile day — the longest day I ever completed. As I was watching the movie, I traced every mile of that day’s route through my head. I imagined the route as a single fishing net, and I could hardly wrap my brain around that image.

“Planet Ocean” was one of many wake-up calls I had on the Climate March of how serious our situation was. The oceans, a seemingly infinite resource, are dying.

As I sat on a bench outside of a gas station on one of our rest-stops, a question I had never asked myself before crawled into my head: Is it a good idea to have children?

I was so shocked by this thought, so repelled by the idea of not having children, that I violently shoved it away and promised myself I would never think of it again. Despite my determination to exterminate it, this question persisted in my head and became the elephant in my brain.

Overpopulation is a sensitive and controversial topic. Choosing to have children, and how many, is an extremely personal, and often cultural, decision.

The issue of overpopulation is not an excuse to take responsibility off the shoulders of white, affluent people and push it onto poor, minority populations that tend to experience higher birth rates. In my Principles and Practices of Sustainability class this semester, I learned that just two American children have the same carbon footprint as 337 Bangladeshi children.

Simply being concerned about having too many people is not enough — it needs to come hand-in-hand with consumption. There is an anti-holiday called Earth Overshoot Day. This is the day the human race has collectively used up the resources the planet can viably provide for one year. Every day after Earth Overshoot Day until December 31, we are living off resources borrowed from future generations.

Earth Overshoot Day happens earlier and earlier each year. Last year, it fell on August 19. We are eating our planet like locusts.

That night on the gas station bench somewhere between Ohio and New York City, my fellow Marcher, 18-year-old Kelsey Juliana, was sitting next to me and holding our youngest Marcher, a sleeping 3-year-old Tilly, in her arms. I turned to her and I started to cry. I cried out of fear. I was, and still am, afraid for the future. I am afraid for Tilly, who has been born in the midst of this desperate struggle to stabilize the planet. I grew up never having to think about water. Only about 15 years later, Tilly was born into a world where places like California are wringing out their last drops.

After coming home from the Climate March and wading waist deep into organizing a resistance around dangerous gas storage on the shores of Seneca Lake, I read Sandra Steingraber’s “Having Faith,” her book about having her first child, Faith, who is now 16 years old. While the focus of Steingraber’s book is on the rampancy of environmental pollution and how it affects pregnancies and infants, I found myself clinging onto every beautiful description she wrote about what it was like to be pregnant.

“I lean against a log and watch light play in the unfurled oak leaves. Even with my eyes closed, I can see the dance of sun and leaf. Which gives me an idea. I pull down my stretch-panel jeans, roll my shirt up my ribcage, and lie back, belly to the sky. In the sunlight, the skin over my abdomen feels taught and tingly. I am a great closed eyelid.

And that’s when I feel it for the first time. Like the fluttering of a bird cupped in a hand, only deep inside and down low. Fetal movement.”

At the time I was reading Steingraber’s book, I had already reached a strong conviction about disabling my ability to have children. I cried many times while reading her journey through her first pregnancy as I understood more and more exactly what it was I was giving up. A woman’s ability to grow another human in her womb is a mind-boggling miracle of nature, and I would not be partaking.

My doctor informed me that for ethical reasons, no doctor in his or her right mind would perform a permanent procedure on someone my age. So, she instead directed me to a long-term form of birth control; intrauterine devices, or IUDs. I settled on one called Paragard, which would prevent me from having children for 10 years. After eight months of thinking and agonizing and reflecting, I received my Paragard Friday morning. 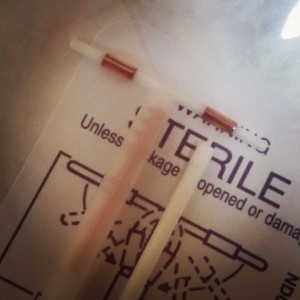 I have not given up on motherhood. I am changing my idea of what motherhood means. Instead of bringing more people into the uncertain future of an already strained world, I hope to someday adopt. The children who have been born are already here; there’s no going back. And each and every one deserves to have food, water, shelter, education and love.

Specifically, they deserve the fiercely dedicated and unshakeable love my parents gave and continue to give to me. And that’s exactly what I plan to give, regardless to his or her DNA.

One of the best things we can do to address climate change is to look at ourselves. We can change our own lives whenever we want. No need to wait for legislation and “leaders.”
I’m not talking about changing the light bulbs. It’s time to fully examine our lives and ask ourselves the hard questions — the questions we never imagined we would ask. The answers may be life-changing. But this is exactly what we need in order to sustain a livable future: a major change in our current way of living.