Bill Clinton to cameo in ‘The Hangover 2’ 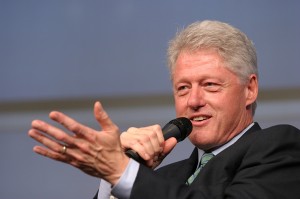 The headline says it all, but I have to ask: are all our nation’s leaders going to find their niche in comedy? Al Gore got his sort-of shot in the comedic spotlight mainly for doing nothing on Saturday Night Live’s “What Up With That?” skit, poking fun at his fading celebrity. Rudy Giuliani even got a joke or two to help ease the nation’s spirits after 9/11 left the country in a state of shock and despair. And now, former president Bill Clinton is taking his chance at the big leagues.

Clinton reportedly shot a short scene as himself in “The Hangover 2” yesterday in Bangkok.

And get this: Billy wasn’t just there for shooting his scene. Oh, no. He also gave a speech in the capital city on clean energy.THAT my friends is killing two birds with one stone.