Ok. This is the last Girls related blog post. I swear…at least for the month of September. You may remember that last week I had “Vomit” as the Song of the Week. Well, I went to Boston this weekend and saw them live for the first time, and it was a solid show.

I was plenty excited because I’ve been waiting to see this band for quite a while now, but I had also never been to this venue called Paramount in Boston. I was expecting some small, dark club in Allston or something. No. Not at all. Turns out, it’s a renovated opera house-ish venue that was purchased by Emerson. It reminded me of the Providence Performing Arts Center, except drastically smaller. But the ambiance was incredible: elaborate paintings on the walls and mood lighting that bounced off the golden trim. Also, two soundtracks were played while we waited for bands to go on: “Pirates of the Caribbean” and “Tron.” The commercial nature of these compilations seemed odd given the grandiose and old-world nature of the venue, but the acoustics made the tracks sparkle. 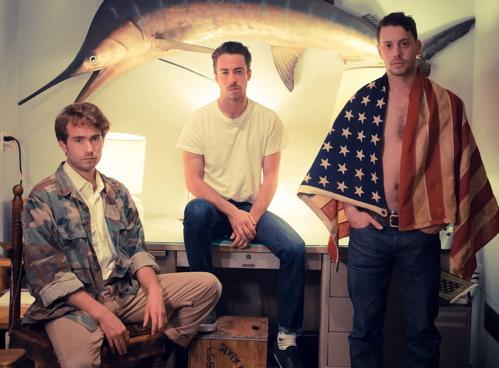 Los Angeles-based Papa opened the show with their classic rock tunes that featured plenty of bass and piano. I’ve never seen anyone use an actual amp as a piano bench, but apparently that’s all the keyboard player of Papa needs. I dug it. The guy had some crazy amounts of energy as he kicked his leg around while he pounded away on the keys. Lead singer and drummer Darren Weiss thrashed away on the drumheads and he showcased an impressive vocal range. I have a rule that I don’t buy opening bands’ albums the night I see them. I give it a little while to sit in my head and decide if I really do enjoy the music. I chose to disregard that rule last night.

Next up was the oddest act I’ve ever seen perform live. I speak of NoBunny. The wardrobe of choice was blue briefs, an unzipped leather jacket and a furry rabbit mask. It was uncomfortable to say the least. But after I got over the shock of the whole spectacle, the songs were able to hold their own. Even though they dealt mostly with screaming and sexual themes, I enjoyed. The punky garage rock made it impossible to keep my feet still.

And right around 10pm, Girls took the stage. Their mic and instrument stands were beautified with fresh flowers and the band came out timidly as the audience rose to their feet. Set-opener “My Ma” was the perfect indication of where the evening was heading: raw, emotional and soul-searching. Lead singer Christopher Owens moaned over the languid organ lines as the guitar twangs pushed the song deeper. The emotion was simply overwhelming as Owens sang, “it’s so hard to feel so alone, and so far from home and you, my Ma.”

Depression reigned supreme, but the band found some space in the setlist for more upbeat songs such as the wildly popular (among indie circles) “Lust for Life” and the one-of-a-kind “Die.” “Die” sports a menacing guitar lick and some serious attitude, which contrasts starkly with just about every other song in the band’s repertoire.

The encore was a revelation as Owens emerged by himself and took up his guitar to play the opening to “Jamie Marie.” The soft guitar strums tore away at the heart as he sang, “maybe I didn’t realize the way I love the way you move until I moved so far away.” As the song progressed, the rest of the band took the stage and joined in. The final song was “Hellhole Ratrace,” a slow-burner which builds until it collapses in on itself in the grandest of fashions. The band set down their instruments and left the stage while tossing flowers to the audience who roared with approval.