Two years ago, rocker Bret Michaels performed as part of the 2009 Tony Awards opening number in promotion of “Rock of Ages,” the hit Broadway jukebox musical that featured music from the singer’s band Poison. As Michaels left the stage, he knocked into a descending set piece, damaging his nose and — according to him — causing the life-threatening brain hemorrhage he muscled through last year. 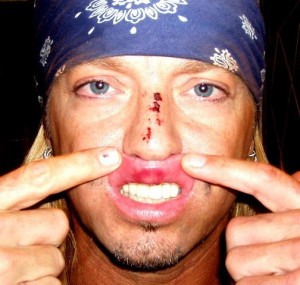 Now, Michaels wants some payback. He’s suing the Tony Awards for the incident, claiming that he was never properly informed of the set change. During the show, host Neil Patrick Harris joked about the moment, saying that Michaels’ performance “gave head-banging a whole new meaning.”

We’ve all heard the expression “no hard feelings,” but apparently that doesn’t apply to this Poison frontman, who is pretty clear about one thing: