In 1942, Billboard magazine, best known for its Hot 100 ranking of popular songs, introduced a new supplementary chart. Titled “The Harlem Hit Parade,” it tracked songs by African-American artists, and, by extension, music purchases and radio impressions by black audiences. After nearly a dozen changes in name, format, and methodology, the chart saw an unprecedented outcome in its 2013 Year-End ranking. The top four songs on what is now called Hot R&B/Hip-Hop Songs were all led by white artists: 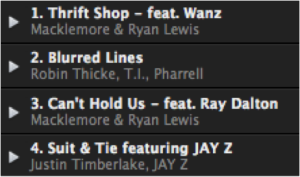 Until Billboard changed its policies a year ago to put mainstream radio and digital sales into the equation, the chart served an important purpose as a cultural barometer for the African-American community. For six decades, it offered a space for representation of artists in rap, soul, R&B, and hip-hop who otherwise might not have appeared in the magazine’s pop-dominated pages. Today, that domination has crept even further. Focus on the core audience of the varied genres under the Hot R&B/Hip-Hop Songs umbrella has been lost in favor of more generalized tastes.

While the concept of a “segregated” chart sounds extremely archaic at face value, and although the reality exists that the chart, in its previous form, was designed to serve the financial interests of record labels (see also: Berry Gordy’s manufacturing of Motown), it provided a necessary boost to the visibility of artists who were marginalized by mainstream radio. It celebrated the successes of those acts who carried on and advanced a rich musical tradition. Today, its redundancy and near-obsolescence serves as a reminder of the power of commercialism to blend cultures beyond distinction or recognition.

What this year’s Hot R&B/Hip-Hop Song chart results actually say about race is up for debate, but Chris Molanphy, writing for Slate, summarizes the situation as follows: while pop listeners are actually embracing far more variety than in the past, we’re “honoring the sound of black music. Just not actual black people.”