On June 10th we had a very successful rally in Colorado Springs with over 150 people in attendance. Some are saying that it’s the best rally we’ve had so far. Since I haven’t been here the whole time, I can’t really speak to that, but I can still say it was pretty awesome! 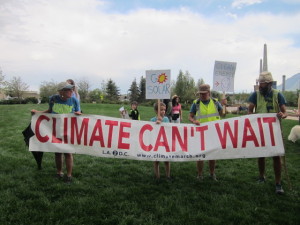 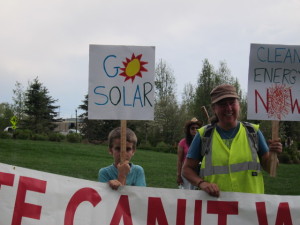 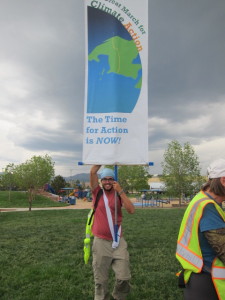 Jerry with a Climate March banner! 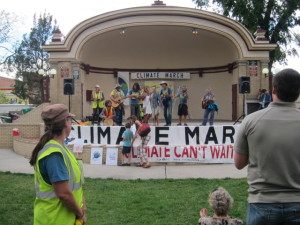 The Climate Justice Gypsy Band performing at the rally

Just before the speakers began, a few marchers, including myself, staged an antiphony. It’s like a verbal flash mob. We each had an umbrella and specific lines to say that had something to do with climate change. Jeffrey started — he opened his umbrella in dramatic, theatrical fashion and said his first line, which came from a climate change study. Then Kat went; she listed off solutions to climate change (like solar energy, recycling, etc.). Then it was my turn. My lines came from Aldo Leopold’s essay “Thinking Like a Mountain,” which explores the effects of exterminating wolves on the ecosystem.

“We reached the old wolf in time to see a fierce green fire dying in her eyes!” I boomed out the first line. By now, we had everyone’s attention. Marie, who came after me, listed off threatened species in Colorado. Jane, who probably had the most humorous part of the bunch, read off quotes from climate denying representatives, like this one:

“Thousands of people die every year of cold, so if we had global warming it would save lives … We ought to look out for people. The earth can take care of itself.” —Duncan Hunter

Last was John, who read lines from something he had written.

We went around in a circle like this, reading off our parts line by line, and on the fourth way around we all started talking at once, creating a loud, confusing cacophony of voices all jabbering about climate change in one way or another. Kat, who was reading off solutions, slowly walked into the center of the circle we had created, and we all quieted and knelt down, pointing our umbrellas at her as she offered the finishing line. Everyone loved our performance.

After our antiphony was completed, I had an opportunity to speak at the rally, and I’ve received lots of positive feedback about it. If you’d like to listen to my speech, you can find it here.

Despite the unforgettable time at the rally, I think the greatest experience for me was with my Colorado home stay family, the Wallers. I stayed with Sam and Marianne Waller and their three children, Abel (16), Rowan (12), and Geneva (6). They have a beautiful home in the suburbs and were delighted to open their home to my fellow marcher, Carrie, and I. 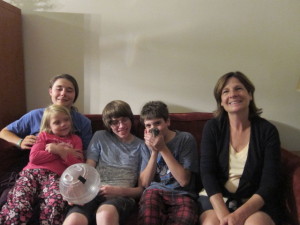 From left to right: Me, Geneva, Abel, Rowan, Mabel the hamster, and Carrie

The Wallers are an energetic bunch! Geneva may only be 6, but she has an amazing vocabulary. While I was there both Genie and Rowan were attending partial-day summer camps. Genie was learning about bugs at her camp, and had to catch one for a homework assignment. Rowan does gymnastics, and he goes to the Colorado Springs Olympic Training Center and trains alongside Olympic gold medalists! Meanwhile, Abel is also super smart and has built his own computer. We had a lot of fun discussing articles about climate change from scientific magazines together. 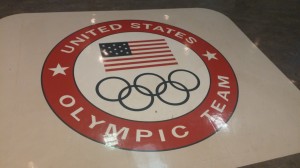 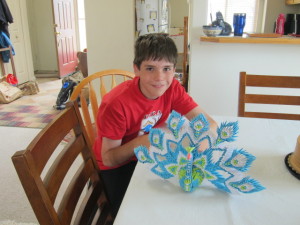 This is the peacock Rowan made for Marianne for Mother’s Day. It’s made entirely out of paper triangles! 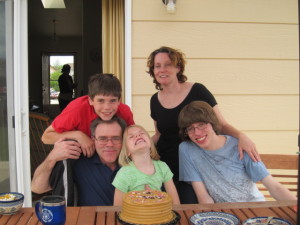 While we were visiting, it was Sam’s birthday! Here’s the family with the caramel birthday cake that Genie decorated.

While staying with the Wallers, they took Carrie and I to see the Garden of the Gods and Manitou Springs, a neighboring town. 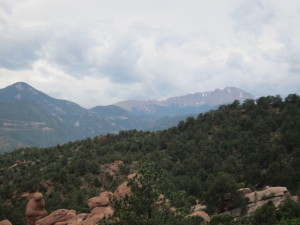 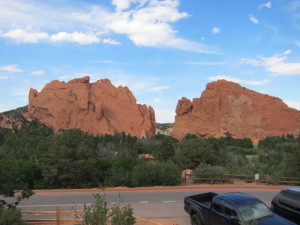 Rock formations at Garden of the Gods 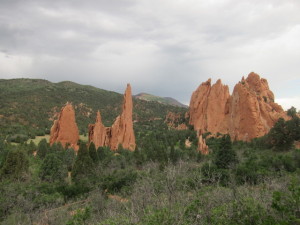 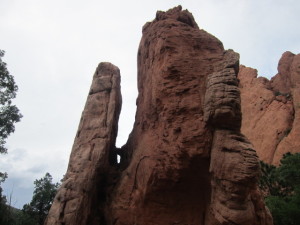 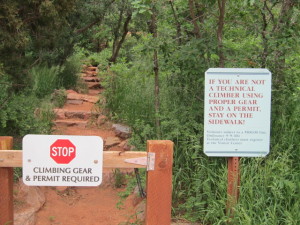 Garden of the Gods is a great location for rock climbing! 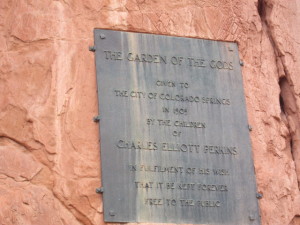 Garden of the Gods was donated to the public by the land’s original owner. 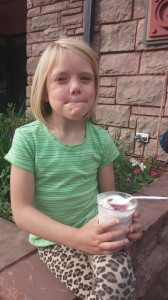 Custard with Genie in Manitou Springs! 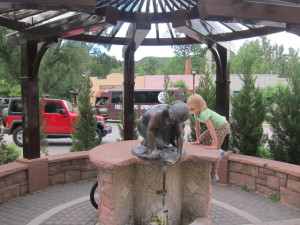 Genie on one of Manitou Spring’s famous springs. They are sprinkled throughout the town and offer very mineralized water. It sort of tastes like seltzer water. It makes great lemonade!

I will miss the Waller family dearly, and I wouldn’t trade my brief time with them for anything. But for the two nights I stayed with them, something didn’t feel quite right. It didn’t take me long to pin it down: it felt weird for me to be in a house. Rather than feeling comfortable with a bed, furniture, electricity, a hot shower, and laundry, I almost felt enclosed. I felt weird when we were driving around touring the area — everything was going by so fast. It wasn’t their fault – the Wallers were as hospitable as they could be — I was just transitioning from marching to normal life.

Now, when I’m inside a house or building, rather than enjoying all the things I don’t usually have on the march, I just notice the excess amount of things. Humans have so many possessions that we need additional objects to hold all of our objects (laundry baskets, magazine holders, luggage bags, purses, drawers, shelves). There’s just so much stuff!

Even on the march, where life is simplified, we are having a possession crisis. We’re almost halfway through the march and we still haven’t pinned down the most efficient way to organize our gear truck. We’ve been having lots of meetings about it and we’re starting to figure out a plan, but there’s one thing we can all agree on: we have too much stuff! Right now we have around 40 people on the march, and we’re concerned that if more people come in we won’t be able to fit everything in the truck. The last thing we want is to have more gas-guzzling vehicles.

Two days ago I happily sent a box of things I didn’t need back home. It felt great to lighten my load and make more shelf space on the truck. While I’m on the march, I want to focus less on the material world and more on the finer things; nature, friendships, music, making a difference in my world, and my personal development. The less things I have, the faster I can pack up each morning and start my day.

After my stay day with the Wallers in Colorado Springs, I walked about 15 miles to our next campsite and set up my tent. I curled up in my sleeping back and slept like a rock that night despite the busy railroad track just a stone’s throw away from camp. 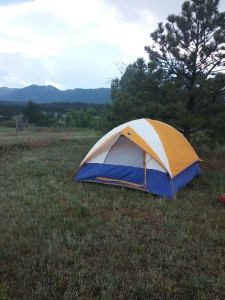 I know when I get home in New York, I will have a lot of changes to make. If I continue life as it was before the march, then I may as well have never gone.

I have posted a bunch of videos on my YouTube Channel! If you want to get a sneak peek of marcher life, check them out! You can find my channel here,

If you have any questions or comments about the march, leave a comment on my blog posts or email me at viridorari@yahoo.com