Seneca Lake is not the only place hurt by FERC

Jimmy and I were standing off to the side of the hall, out of the way of foot traffic. We each had a shoulder leaned against the wall, and I had my hand on his arm as we leaned toward each other and talked quietly between ourselves. There was so much I wanted to say, but out of the corner of my eye I could see two security officers talking to each other and looking our way. Our time was short.

After some deliberation, one of the officers came over and interrupted our conversation.

It was hard not to respond with anger. I turned to the officer, still holding Jimmy’s arm.

“I’m about to leave, and I don’t know how long it will be before I see him again. We’re just saying goodbye.”

“Well, the door’s that way,” the officer pointed with one hand and put the other on his hip. He was unmoved.

Jimmy stepped away, and my hands were suddenly filled with air. As he moved toward the elevator to go back up to the second floor, the officer adjusted his stance as if to step between the two of us and guide me out.

“Hey, Jimmy,” I said, sidestepping the officer before he could object. Jimmy stopped and turned back to me, and we wrapped each other up in a tight hug. The officer stood there and glared at us for the whole exchange with his arms crossed, and I told Jimmy I loved him loud enough so the officer would hear. It was a small act of defiance.

The officer followed on my heels until I went through the doors and into the foyer of the Calvert County Courthouse’s main entrance. Before I walked out into the chilly evening and went to my car to drive back to Ithaca, I allowed myself a few moments to crumple against the foyer wall and let go of the tears I had been holding back all day.

I wasn’t ready to go.

New York’s Finger Lakes Region and Maryland’s Cove Point have something in common. The Federal Energy Regulatory Commission (FERC) in Washington, D.C. has approved gas projects in both places that put the local community in danger. Along the western shore of Seneca Lake, near Watkins Glen, the FERC has given a green light for Crestwood Midstream to expand its capacity for methane gas in unstable salt caverns.

In Lusby, Md. the FERC approved Dominion’s liquefied natural gas export facility on Cove Point; the first of its kind on the East Coast. It is estimated that this single facility will release more heat trapping gases than all seven of Maryland’s coal fired plants combined.

Like the We Are Seneca Lake movement in New York, Lusby has also developed its own resistance, dubbed We Are Cove Point. To date, around 20 people have been arrested for various acts of civil disobedience, including blockading gates, trespassing onto active construction sites and locking down to construction equipment and doors.

On Monday, Feb. 23 many of them went to trial at the Calvert County Court for their peaceful resistance actions. These included some of my friends from the Climate March and folks who were arrested and served jail time at Seneca Lake. In fact, three of them — Jimmy Betts, Kelsey Erickson and Michael Clark — were arrested alongside me at Crestwood’s gates on Nov. 17 of last year.

A group photo of all the “Cove Point Protectors” who appeared in court on Monday. They are wearing red bands in the same fashion as We Are Seneca Lake protesters.

I made a last minute decision Saturday night to drive out to Maryland Sunday morning, stay the night, miss class on Monday to watch the trials and then make a mad dash back to Ithaca for my 8 a.m. class on Tuesday. Now, as I write this post, I’m frightfully behind on sleep and swamped with backed up work, but it was worth it.

And as it turns out, my friends needed the extra support. Dominion has given immense amounts of money to Calvert County police specifically so they could hire special operations officers, 10 of which are a part of the “Dominion project” security. These officers were dressed in green uniforms, giving them the appearance of military. Many of them were in court that day for the trials; they were called as witnesses to testify against the defendants, who they had arrested. I was shocked to discover, as the proceedings went on, that these very same men were also assisting in managing the courtroom and enforcing Judge Michelle Saunders’s orders.

But, don’t take my word for it. Watch this Dominion YouTube video where the Calvert County special ops take their new toys courtesy of Dominion for a spin: heavily armed patrol boats.

In the video, the narrator says, “If the need ever arose, these vessels and their highly trained crews are ready to respond to anyone jeopardizing the security at Dominion Cove Point.”

Calvert County police are at the beck and call of Dominion, and they’re not even trying to hide it.

Many of my companions were prepared to go to jail after their trials found them guilty of trespass, but the judge instead sentenced them a fine with three years of unsupervised probation. Even when some defendants stated they would never pay a fine and made strong cases for why jail was a better option for them, the judge gave them probation anyways. She sent only one person to jail for a sentence of five days: Steve Norris, who used a bike lock to lock his neck to the doors of a Dominion contractor’s office. This decision appeared to be made based on Norris’s previous record of civil disobedience, and his admittance that in the past he had only received small slaps on the wrists for his actions. Even with the jail time, Norris still faces three years of probation.

After a group trial of eight of the defendants finished, finding them all guilty of trespass and sentencing them to three years of probation, the court was called into a short recess and the judge left the room. The eight of them gathered off to the side of the courtroom to discuss what had just happened to them, and they decided to start singing a protest song.

Before they could finish the line, a security officer burst out from the back and ordered them all out of the courtroom. None of them were to be allowed back in for the rest of the day’s trials. Out of curiosity I followed the group into the hallway to see what would happen outside with the officers. Not long after, court was called back into session, and a security officer informed us that unless we were directly a part of the case, no one was to be allowed into the courtroom.

I engaged the officer, reminding him that I was a member of the public with sixth amendment rights to observe court proceedings. He refused my argument and insisted that these were Judge Saunders’s orders. Thankfully, the judge changed her mind a few minutes later and I was allowed back in to observe the proceedings.

Despite having been permanently kicked out of the courtroom, some of the singers were able to get back in. This had a lot to do with the fact that the officer who ejected them from the court couldn’t remember very well who had been singing and who hadn’t, and who he forced out versus who came out on their own accord. He did, however, remember Erickson very well. Erickson attempted to re-enter the court on multiple occasions, and each one was thwarted. The special ops officers came out in the hallway to keep watch, and eventually they expelled Erickson from the courthouse entirely.

After spending four hours in court, I had to leave just before 5 p.m. to start my trek back to Ithaca, and the trials were still not done.

Many of the people I was with for that brief 24-hour period in Maryland I had not seen since the conclusion of the Climate March in November. Many of them were new faces with names I had heard only over email, and who I was glad to finally meet. It was hard for me to leave all of them behind in that court with the special ops and the intense courthouse security officers.

Security officers who would not even allow me a few minutes of conversation with Jimmy off to the side of a hallway before we parted ways once more for an indeterminate amount of time.

I was already running behind on schedule, but I sat in the court parking lot and wrote a brief letter to Jimmy, saying all the things I had wanted to say while we were together in the hallway. I couldn’t leave with them unsaid. I folded up the piece of paper and tucked it under the windshield wiper of his car for him to find later.

As I started up the car and pulled away from the courthouse, aiming north to New York, I couldn’t help but think to myself that this whole mess with Dominion at Cove Point made dealing with Crestwood at Seneca Lake look like a walk in the park.

After a few hours of driving, my tears evaporated into renewed resolve. 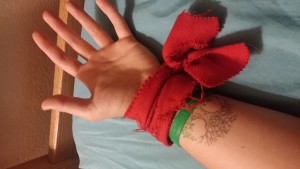 A picture of my red solidarity band from Monday’s trials.

Read more accounts of Monday’s trials at the following links:

“In court, Cove Point defenders vow to fight on” by Elisabeth Hoffman

“Going to Jail for Justice” by Melinda Tuhus

Sourcing for “It is estimated that this single facility will release more heat trapping gases than all seven of Maryland’s coal fired plants combined.” http://www.wearecovepoint.org/wp-content/uploads/2014/11/Top-Ten-Reasons.pdf