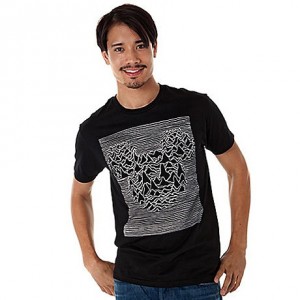 I think Disney may have officially lost their minds…or just their sense of appropriateness when it comes to their image. Yesterday, this lovely piece of apparel popped up in my Facebook newsfeed from various friends and news outlets.

What we have here is a Disney t-shirt with a Mickey Mouse likeness created using Joy Division album art. The designers took British post-punk outfit Joy Division’s iconic album artwork for Unknown Pleasures and turned it into a mouse silhouette.

Now at first, I was unsure about how I felt about the whole thing. Disney is commonly referred to as “The Happiest Place On Earth.” Personally, I could take it or leave it. But for many people, it’s the epitome of happiness.

The legacy of Joy Division is rooted in hopelessness, depression and the moment lead singer Ian Curtis committed suicide. These images don’t exactly bring Disney and whimsical sing-a-longs to my mind.

But here we are with this shirt in all of its twisted and awesome glory. I ultimately decided I wanted it because who doesn’t like being a walking paradox? Unfortunately, I waited too long and it is now sold out, as I can deduce from a broken link to the Disney Store.

This may be for my own good. Something tells me most of my cohort would think it was a Deadmau5 shirt and he’s not really my thing.