“True Blood” Season 3 Finale? What? Did anything even happen?

If you’re a “True Blood” fanatic, then maybe those thoughts have been swirling through your head this week … because they sure were in mine. After 11 episodes in Season 3 of the HBO series, I’m left trying to piece together a series of half-lived plot lines and characters that haven’t been explored enough to merit a full-circle, traditional HBO season. And I’m mad as Hell. 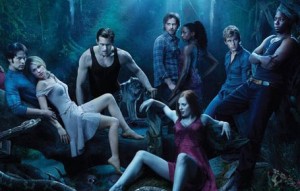 The previous seasons of “True Blood” had a clear-cut focus. The first centered on the uncertainty in a town when a murder occurs. The second veered into the realm of the demonically supernatural, introducing us to a maenad with some devilish intentions. But if anyone can accurately wrap up what was accomplished in the third season, I must tip my hat to them. Yes, there was the element of discovery. Sookie discovers her true identity and Eric discovers a calling he may have not known before. Jessica discovers her inner beast. But these plot vignettes weren’t enough to top the gut-wrenching twists that made the first two seasons so successful. And after a while I thought I was watching a sloppy soap opera with the occasional side boob/apparently real sex scene. To the “True Blood” team: ending or opening a show with Sookie taking a short pause and then screaming at the top of her Louisiana lungs is not original. We’ve seen it before. Move on.

I suppose I knew that my first real post this semester would be a short, unorganized rant about “True Blood.” And I embrace that. But me typing this only heightens my anger toward the 11-episode time frame I’ve spent in a state of disillusionment — fueled primarily by brilliantly placed one-liners. (Who could forget Russell Edgington’s “We will eat you. After we eat your children…Now time for the weather. Tiffany?”)

Now I wait for the finale. Just like a good little “True Blood” fan. But I’m still mad…