As I marched my way across the gorgeous state of Colorado, I couldn’t get over the mountains, the wide open spaces, the crazy rock formations, the gentle forests and the big blue sky. At that time, I was still settling into March life and was perpetually amazed by the kind and welcoming spirits of my fellow Marchers. I noticed something else too; I couldn’t stop thinking about how much my friend Rob Lister would love the Climate March.

One night as we camped in the San Isabel National Forest — which remains to be one of my favorite campsites so far — I sat down beside a bubbling stream near our campsite, dipped my feet into the cool water and wrote Rob a letter. I described to him the beauty of Colorado, the physical challenge of walking 15 to 20 miles each day and the incredible new family I had acquired in the Marchers. I ended the letter by begging him to come out and see it for himself.

I know how big of a deal it is to leave your “scheduled” life for a while to do something “crazy” like walk across the country, and so I didn’t know what to expect in reply. But a few days later he contacted me after receiving my letter and said something to the effect of: “I have to tie down some loose ends, but I’m in!”

I met Rob in the spring semester of my first year at Ithaca College. We ended up in Professor Gagnon’s Intro to International Relations class together, and we were two of the more engaged and outspoken students in class. Often our classroom conversations were so intriguing that we had to continue them outside of class, and a friendship started. We got into the habit of eating lunch together after our class. We realized we had a shared love for the outdoors, and we started going hiking together. He talked me into trying the IC rock climbing wall, and I was hooked after a few climbs. Soon, I was climbing multiple nights a week with Rob. We quickly became best friends.

When I originally told Rob about the Climate March, he was very excited and supportive. He bought one of my support t-shirts, helped me get ready and told all of our friends about it. Not surprisingly, he also became enthusiastic about participating it in himself.

Although Rob ended up missing out on the end of Colorado, he did make it to Nebraska, marching ten days and nearly 100 miles from Grand Island to Lincoln. Picking him up from the travel center in Grand Island was a joyful moment. Although I love being on the March, the waves of homesickness are inevitable. It felt good to share my experience with someone from home.

Rob was happily surprised at how quickly he fit into the community, but I knew he would all along. Beautiful outdoors, abundant exercise and awesome people — what’s not to love? 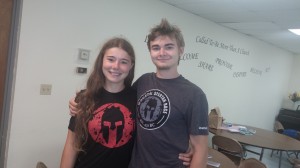 Rob and I on his first day in Grand Island. We’re both sporting our Spartan Race shirts! 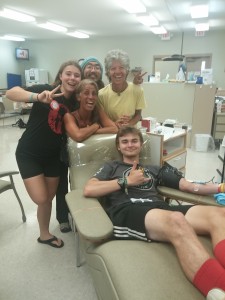 Rob donating blood for the first time with the American Red Cross in Grand Island. He went with me to give blood, but it turned out I couldn’t donate due to low iron levels. He and fellow Marcher Kim (yellow shirt) gave blood anyways with the support of Lala, Jimmy (blue hat) and me. 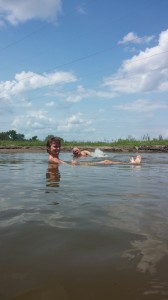 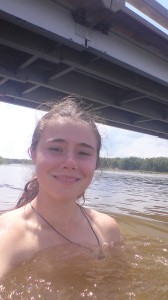 Swimming in the Platte River with Rob and Izzy along our marching route. 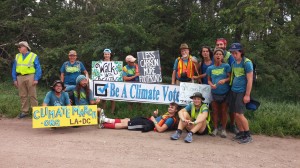 Rob (laying down and front) and me (sitting in front) on our way to the Proposed KXL pipeline route and the Build Our Energy Barn on July 19th. 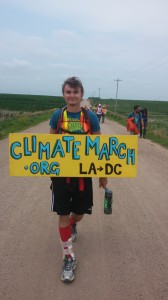 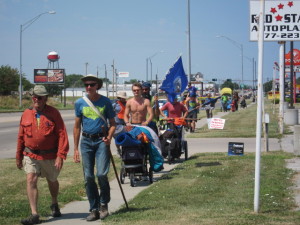 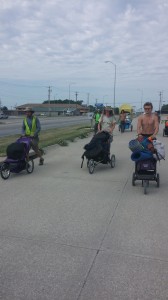 Rob helping to push a gear cart on our way into Lincoln, Nebraska.

Rob said his experience with the Climate March was life changing, and he was really glad that he heeded the call of my letter. But, I’ll let him explain for himself. Here’s a video of Rob’s mini-speech to the Marchers two days before he left. His account of how the March influence him is now being used in the Climate March’s recruitment package! Watch here: https://www.youtube.com/watch?v=zBA4GlNmE40&list=UUJxKfqhhbZOmSByvHKlMHQA

Way to go Rob! I really enjoyed my time with my classmate on the March. Rob’s decision to join made Ithaca College the college with the most students participating in the Climate March so far! I think it would be awesome if more IC students could join up for parts of the March… contact me if you’re interested!