Even in China, it’s Social Media activism, not slacktivism…

When we talk about activism on social media, we immediately think about the students uprising during the Arab Spring or Occupy Wall Street. We can easily think of democratically/politically motivated online activism, but there are also social media activism that protest against promoting stale tradition and values. They are in no way less important than the politically motivated ones, sometimes they are much more relevant to people’s lives and resonate better with the public, therefore better serve the purpose of educating people.

Chinese New Year is often the times for business to come up with creative commercials to attract more customers. Baihe.com, a dating website, released a commercial about a young single woman who finally gets married for the sake of her dying grandma. The title reads: Because of love, I won’t wait. The commercial only sends one message: Whether or not it’s the right person, as long as you get married, you have fulfilled the family’s wish, your personal wish and happiness should be subordinated to the family.

The commercial is not completely out of touch with reality, marital pressure from the older generation for the Chinese youth is a real problem. That is also why Baihe.com came up with this commercial in the first place, but this time it really backfired on social media.

On Weibo, the Chinese version of Twitter, Netizen creates a page titled: thousands people boycott Baihe.com. The page has generated over 120,000 posts and over 6,000 “likes”. Any post with the hashtag “#thousands people boycott Baihe.com” (In Chinese, of course) will be displayed by descending order, according to its popularity, determined by its number of response, “share” and “likes”. The discussion page allows people to take sides, the red means “objection” and the blue means “support”. Below are one example from each side.

If all the women naturally go get married when they reach the proper age, why would anyone need to force them into one? What does this mean? That means more and more women have gained intellectual and material independence that they do not need marriage to prove their worth and values. Women are having a great awakening and the traditional patriarchal structure in the society is being challenged. The disgruntled patriarchalists are relentlessly searching for justification to imprison women with marriage. 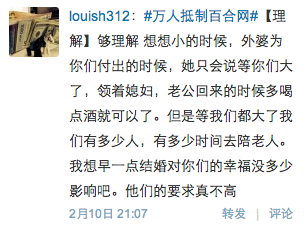 “Understandable. Thinking back on when we are young, when our grandmas were working hard to take care of us, all she wanted was when you grow up we will come back our wife/husband and just share a meal with them. But how many of us would actually have the time to do just that? I think getting married a bit early wouldn’t hurt, and they (the grandmas) are not asking for much.”

Both sides present valid arguments. It’s still an ongoing conversation because Baihe.com has not responded with an official statement. But the heated discussions on social media has undoubtedly grabbed their attention and they would need to think about potential ways for damage-control. In the future, they will hopefully be more mindful about the message they are sending across and the values they are trying to convey to their targeted audiences.

Sometimes the standard for assessing the effectiveness of social media activism is not necessarily whether there is a tangible result. As long as it is encouraging the public to think and to participate in discussions, it has achieved its objective. Some people call it slacktivsm, I completely disagree. Before asking people to take action, people must first have a change of heart; before asking people to do something big, they must first be interested in engaging with the smaller issues. I am seeing tremendous potentials in my own people through movements on social media, maybe someday, just maybe this will lead to a movement that transforms the fate of my nation and the course of its history.