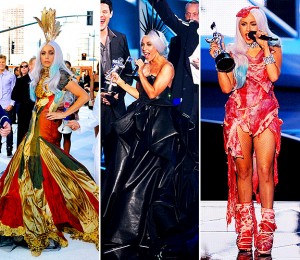 Lady Gaga arrived in a gown by Alexander McQueen that rivaled every other lady’s outfit. The look featured a torso-fitted, tri-color dress with red, gold and green vertical stripes that cascaded into a flowing pouf and met a bunch of tulle at the bottom. While the dress was breathtaking in itself, the wild, snake-print high-heels completed the outfit and paid homage to a designer whose distinct style will remain a fashion legacy. Gaga’s look definitely turned heads on the white carpet for all the right reasons and was definitely a step up from the Kermit the Frog stuffed animal dress in that 2009 interview.

In the past, Gaga has sported some crazy outfits that incorporated tons of leather, lace and spikes. Her second outfit at the VMAs embodied her dark style but didn’t offer anything extraordinarily shocking to gossip about. Isn’t that what the singer attempts to do every time she walks out her door? The Armani dress was a jumble of black, floor-length ruche leather. While the black spiked headdress was somewhat crazy, the outfit as a whole was just kind of blasé. She should have gone with a more head-turning option for the dress she wore on stage to accept the first of her eight awards.

Not
The Meat Dress

Her last outfit definitely turned heads but not because it was wonderfully insane. The Franc Fernandez dress was raw, undone and simply disgusting. The singer had real red meat hanging off her body and looked like an advertisement for a butcher shop. The steak positioned on top of her head was gross enough to send vegans in an uproar and make meat eaters want to go vegetarian. As if looking like a giant piece of bacon wasn’t nasty enough, Gaga completed her dead cow look with meat heels and a jewel-adorned meat purse. One can only hope she didn’t grill up her outfit for dinner after the show ended.