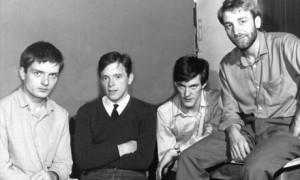 I am obsessed with dark music. I’m a very happy person, but there’s something about a mood-inducing melody that really gets me. I think I may use this music as a type of emotional therapy. Sometimes you just need to be ticked off or upset in order to keep yourself in check.

So I always wondered why I never gravitated towards one of the most prominent gloom groups, Joy Division. It annoyed me because I like all of these bands that subscribe to the Joy Division style of music: Interpol, Editors, White Lies and The Smiths, to name a few. And New Order, the band that was formed by Joy Division members after Ian Curtis’s suicide, is one of my top played artists on the old iPod.

Luckily, this shameful ignorance is being remedied. Every so often, I will have what I like to call a “musical renaissance.” This involves me revisiting bands I should probably like and just have not connected with for whatever reason. The subjects of this renaissance are Joy Division and Radiohead. They’re both starting to click.

On their B-sides album, Sawdust, my favorite band, The Killers, covered Joy Division’s song “Shadowplay.” I really enjoy the cover. It’s monotone and brooding, two things that I find attractive in music. So I figured this would be the best way to get into Joy Division: let’s see how I do with the original.

That worked. I made the connection that I needed and I was able to build off the initial song to delve deeper into the discography. Ian Curtis’s voice is still just a little too monotone for me, but I think the re-mastered version of the albums are helping me a bit. In most cases, the music is so drab that it seems unfitting to listen to it during the day.

If there’s one thing that someone can learn from my renaissance, it’s this: just because you don’t find something interesting on the first listen, don’t abandon it forever. Sometimes you just need to set it aside for a few months (or a year and a half as I found out for Interpol’s Our Love to Admire) and let yourself mature. I’m glad I came back to Joy Division because I owe them a lot.

Here’s how I see it: When Joy Division was in the recording studio, this band U2 was just starting out and deciding what they were going to sound like. Did you know U2 was originally a punk band? After seeing Joy Division in the studio, they developed their current sound. U2 influenced a ton of other bands I like. Once New Order formed, they made this video for a song called “Crystal.” The video featured a bass drum emblazoned with the word “Killer.” A small Las Vegas band saw this video and decided to name their band…The Killers. So without Joy Division, my favorite band probably wouldn’t exist (at least not by that name). Thanks, guys.