I’m a recovering Gaga fan. I loved the Lady when she first hit the scene and I fell under the trance caused by those diva outfits, the catchy music and the ever-present “Ra-Ra-Ah-Ah-Ahs.” But now, as the spotlight fades (no doubt set to burn again once her new album comes out) it’s an interesting time to reflect of the woman who captured the world’s heart and became a representation of so many seemingly artistic values. Because she could sing without a back track, we love her. Because she “empowers” women, we love her. And because she’s “original,” some even worship her.

But really take some time to think: what exactly is Lady Gaga doing? 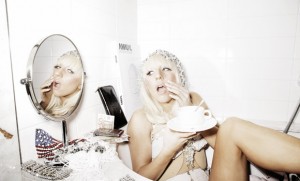 I could go for hours spelling out my thoughts, but after doing some searching I found an article from September that pretty much sums up everything I believe when it comes to the rising Queen of Pop, as some call her.

So, from a former fan who still ticks a little when he hears “Telephone” on the radio…read on, friends:

“Lady Gaga and the death of sex“