Letter to the Future

How climate change is altering my life plans

For this post, I’m going to do something a little different. During my time on the Climate March I have come to realize that the climate crisis is more dire than I could have ever imagined. The reality of the situation has affected me very deeply and has begun to lead me down paths I didn’t even know existed. Since this transformation in my thinking about the future has been very personal, I thought it would be more appropriate to share this in a letter rather than a typically-formatted blog post. The following is an excerpt from a letter I wrote to Chris, a companion in Washington, D.C., while on the bus from Montpelier, Ohio to New York City.

“… I look forward to our time together in Washington, D.C., which I hope will be more thorough and personal before our next long separation.

While all this is going on in my mind, I also have to remind myself of the present and to remain in it.

And yet, this entire movement we’re in is about the future. We’re trying to convince all of humanity to think beyond themselves and to think bigger and farther than the present moment. We’re trying to take on this huge task so a future can exist where humans and the Earth can coexist happily and peacefully. Or else we go extinct and take a lot of others with us … we already have.

Chris, I have learned so much on this March; more than I could have ever imagined. I have learned from you, my fellow Marchers, the communities we have passed through, news articles, documentaries and more. Every day there is something new to discover. The more I learn the more I realize how dire the situation is and how much there is to be done. It sounds like you’re having a similar experience at American University. If you’re responding to it similarly to how I am, I imagine you must be feeling very heavy-shouldered right now. I’m glad we’re in each other’s lives to help carry the load.

I was inspired to write to you at 11:30 p.m. at night after we finished playing the documentary “Planet Ocean” on the bus. The film built from the ground up how life started in the oceans and became what it was, from phytoplankton to us. And then it turned and proceeded to show us how humans have and are dismantling everything nature created from our level down. It was shocking and disgusting to see the reality of what we’ve done. There are fishing nets that are 25 miles long. 25 miles. Bluefin tuna are expected to be extinct soon. Jellyfish are taking over the waters because we have removed their predators. That doesn’t even scratch the surface.

Right at the end of the movie we had a rest break, and Gavain and Kelsey and I sat on a bench together outside the gas station. Tilly was asleep in Kelsey’s arms. I asked Gavain a question I’d been wanting to ask him for a while: if he regrets bringing his children into this world, knowing what he knows. He said although he and Dana are actively raising their children to be fighters so they can face this age, if he had known what he does now before they were born he wouldn’t have had them so they could be “spared of an existence in this world.” 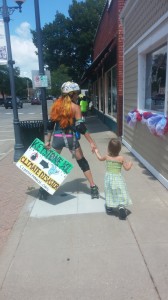 Dana and her three-year-old daughter, Tilly, marching together in Iowa. 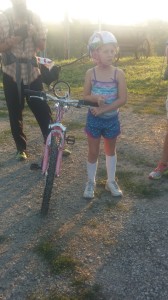 Poppy, 9, preparing to ride her bike into Des Moines.

He had to get up and leave, but I turned to Kelsey and told her for the first time in my life I was having second thoughts about having children, and we broke down and cried together right there on the bench. Eventual motherhood is a part of both of our identities. Having that stolen from us in cruel and unfair, but it seems to be happening. If we love our world, how can we contribute to overpopulation? If we love our children, how can we dump this mess upon them?

I’m not sure yet if I’m ready to abandon motherhood entirely. But tonight was the first night where I considered it seriously.

Chris, I’m so scared. And I’m so ashamed of my species. And yet, I must remain hopeful or we will surely be lost. Without hope, we cannot possibly face this task.

I’ve found that one of the hardest parts of tackling climate change is accepting responsibility for what has happened to our planet and allowing time and energy to grieve. The Climate Marchers have held a couple of spiritual gatherings to allow for grief and lamenting, one of which I participated in while we camped in Cumberland, Iowa. To understand this concept better, I would highly recommend a fantastic article I recently read which encourages us to turn our despair into action. It can be read here.