Last week, I saw “Electra,” the classic play by Euripides about a woman who plots to kill her own mother, performed by the Ithaca College theater department. Though I wasn’t totally blown away by the show, I did notice its acute intricacies and what was an overall powerful story. If you’re looking for something to do in the next few days, I’d recommend stopping by to see the show. 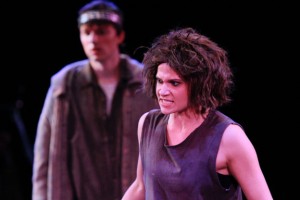 Here’s an excerpt from my review of the show, which will appear in tomorrow’s issue of The Ithacan.

Before the lights go up on Ithaca College’s production of “Electra” by Euripides, the faint echo of a rock scratching against a dull blade reverberates through the theater. It sounds eerie, almost barbaric.

Dim lighting reveals a man standing on a set of craggy rock beds, scraping a stone on his shiny blade. Shovels stick up from the battered ground. The set, the sounds and the atmosphere all set the strong tone of this sadistically dark production that opened last Thursday at the Clark Theatre in Dillingham Center.

Ithaca College theater is a treat that every person on or off campus should take advantage of at some point. These training actors and actresses put on great works of theater every semester, some of which can be compared to Broadway hits out right now. A lot of the shows produced by the department tackle issues or big picture themes like hatred, love or lust. But even if a show isn’t quite fitting to your fancy, you can still say you experienced a night at the theater just a few steps from your dorm. And that’s worth the price of admission.