Leave it to MTV to concoct an awards show that has, among others, nominations for Best Music Hack, Most Viral Dance, NSFW Music Video, Favorite F*** Yeah Tumblr, Best Animal Performance and Favorite Animated GIF.

These and other categories are just a taste of what audiences will see at the new O Music Awards, a Web-based awards show that honors online talent and creativity. Voting starts today and the awards will be presented in a live webcast April 28 on MTV websites, available to viewers all over the world. Lady Gaga and Tyler the Creator lead the award nominations, with three each. 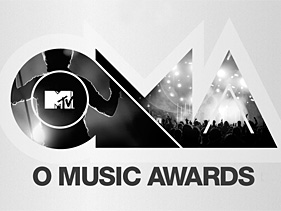 Other nominated stars and memes include Rebecca Black (she ain’t goin’ nowhere, folks), The Lonely Island, The Bed Intruder Song and The Biebs. It seems like the eclectic mix of nominees will draw a lot of attention to the awards show, even though it’ll be competing with the shmorgishborg of Royal Wedding coverage leading up to William and Kate’s big day April 29.

Because that’s just what we all needed…another awards show.