One Year Later: Some Reflections

Around this time a year ago I received some pretty distressing news. I’ve alluded to this on this blog in the past, but I’ve never really gotten specific. And I don’t plan to get specific—it’s not something I should, or could disclose on the internet. But that doesn’t matter. That’s not the point of this post.

The point is that one year ago today I felt like the world was crashing down around me. Family members weren’t speaking to each other, close relationships dissolved, some people who I once trusted turned out to be terrible. September 2014 was tough. I have many journal entries from that time that titled: “shit.”

In my memoir writing class today, we talked about the importance of writing to capture the human experience and saying the things people all feel but are too afraid to admit to. So here it is, there is a real person behind this blog. Sometimes I feel pressure to present myself as this badass activist with all these great tips on getting involved (and maybe—hopefully—I am those things) but in reality, sometimes I make mistakes and sometimes I get sad.

And that’s fine. It’s part of being a person. I don’t want to hide it.

The crazy thing about that time in my life, the time when I felt like everything was crumbling and out of control, is that it brought me much of what I have today. Many of the projects that I started last fall came out of that time, out of that desire to no longer sit around feeling bad but to do something about it, to turn the negative energy around me into positive action.

Talking to others about the way I was feeling and searching out those who would understand what I was going through brought me some of my closest friends, brought me those who care about the same issues I do and who organize with me, and it brought me closer to my parents who supported me and looked out for me the entire time.

To anyone going through a hard time: it sounds cheesy and it sounds fake, but it’s worth sticking it out through the bad times because sometimes the best times are around the corner.

I’m going to wrap up this rambly post with the picture of the view outside my window tonight. It’s just a reminder that there are little, random wonderful things about life that are worth appreciating no matter what is going on. 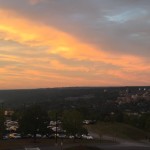 Here’s to an even better year going forward,