and why we need to move away from it

The 1986 Great Peace March for Global Nuclear Disarmament, which was also a cross-country march seeking to change the world, lost one marcher to a vehicular collision. The Great March for Climate Action has gone for seven months without incident, but that awesome track record came to an end on Friday, Sept. 26. While walking along Route 65 out of Maumee and toward Toledo, a pick-up truck operated by a sleeping driver struck me head on. Unlike the unfortunate Peace Marcher in 1986, I can live to tell the tale.

The road I was walking on that day was a busy, winding highway with a small shoulder, but the walking conditions were still far better than many of the roads we traverse. We often find ourselves on narrow roads with no shoulders where cars either have to go around us or pass within inches of us. This is a danger we have been hyper-aware of since day one.

The cart that I have been pushing all of my gear in took on the brunt of the collision and saved my life. The collision wasn’t a brush or even a sideswipe; it was a full, head-on contact at nearly full highway speed. I had glanced down at my phone briefly, and when I looked up the truck was right there in front of me, and I only had time to scream. Because it happened so fast, my body did not have time to tense and I remained relatively limp, which worked in my favor. When the truck struck me, I was thrown completely off of my feet and into the air. I landed in the yard I had been walking along and rolled through the grass. I was back on my feet in moments, feeling dizzy but relatively okay. 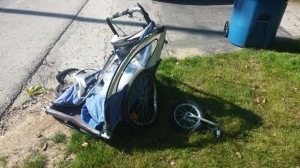 The remains of my push cart after the accident. Read about why I decided to start pushing my gear here.

As the adrenaline wore down over the next half hour, I would discover that I had a fat lip; abrasions on my left knee, my right hip and my right forearm; and that my lower right leg was heavily bruised with a dent in the skin and muscle. The next day my neck would be sore from whiplash. But nothing was broken and not a drop of blood was spilled. I didn’t even need to go to urgent care — some Ibuprofen and an ice pack was all I needed. My good luck is hard to believe.

However, as I’ve walked from New Mexico to our present moment in Ohio, I have seen thousands that weren’t as lucky as I was. Dogs, cats, raccoons, opossum, songbirds, geese, a great horned owl, deer, rabbits, frogs, butterflies and creatures so ground into the pavement they were unrecognizable. A scrap of fur here, a jaw bone there. I have stepped over them, around them, and lifted up the front wheel of my cart so as not to run them over. I have stooped down to pray for their souls, I have fallen to my knees and cried and I have spray-painted two roadside memorials in an attempt to make a statement. I now wear a feather in my hair from a Canadian goose murdered and left to rot on the shoulder. 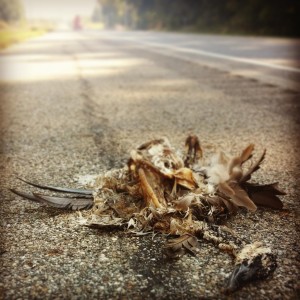 Goose along the road in Ohio 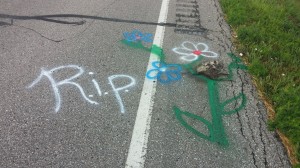 A memorial for an opossum in Iowa 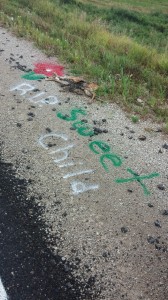 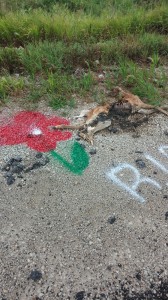 Memorial for a slain fawn in Iowa

With the invention of the car, our entire infrastructure was transformed. Think about it — you can travel from one end of the country to the other without ever leaving a strip of pavement. And then you can come back and take an entirely different route on a different strip of pavement. This infrastructure requires that we slice through forests, drill tunnels into mountains, blow up hills and crisscross rivers, cutting up valuable wildlife habitats into neat little packages that are convenient for humans and no one else. Rather than looking at roads as a necessity for our daily lives, we need to start looking at them for the scars on the face of the Earth they are.

With the invention of the car, we could place two buildings ten miles apart from each other and call them next door, and thus the morning commute was born. Of course I need a car if I’m expected to get to work on time! While marching I have learned to completely disregard the advice and directions of locals. When they give us walking directions, they’re thinking about it from the perspective of a driver; they never tell us about nice biking or nature trails. They also have no concept of distance. If a local tells us something is three miles away, in reality it could be as little as a mile away or as much as six miles away. Our constant reliance on cars for travel has disconnected us from our environment — we can only understand distance in “car-time” and we do not appreciate the actual effort it takes to get from place to place. Have you ever noticed how much more rewarding it is to walk or bike somewhere? Isn’t it amazing the details you notice when you’re not inside a car? How beautiful the world around you suddenly is?

I’d like to revisit a set of statistics from an old post on my blog: Americans now use motor vehicles for more than 90 percent of their daily trips. A quarter of all car journeys are less than two miles.

Our precious cars are born out of our disease of convenience, and the effects have been devastating. Massive fossil fuel consumption and greenhouse gas emissions, disconnection from our environment, loss of ability to conceptualize time and distance, habitat destruction, species loss and endangerment, human injury and even death.

Next time you reach for your keys, think about why you’re reaching for them and whether or not you really need them. 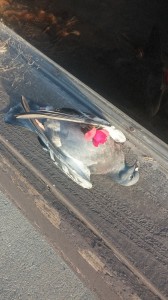