Party’s Over, I’ll Cry If I Want To 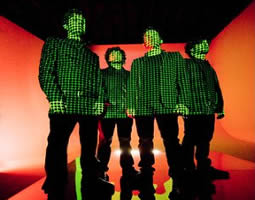 I don’t want any readers to have the misconception that this is an electro-music blog. It’s not. That genre just happens to be where all the action is right now. I also don’t want anyone to think this is a blog that is dedicated to mourning band break-ups. Sometimes it is, but that’s not its primary purpose. This is one of those times.

Back in 2009, I was working at a music store just over the Rhode Island/Connecticut border. One of our tasks was to alphabetize the albums by artist. This was time-consuming, menial work that basically entailed flipping through the CDs for an entire afternoon. Rap was the hardest. Probably because nothing is spelled the way it should be.

One day, while I was flipping, I found this new album we got in by a band called Innerpartysystem. In this case, I judged an album by its cover and it wasn’t that expensive. So after a bit of research, I bought it.

I would describe IPS as electro-grunge. The self-titled album was jammed with hard synthetic elements, rapid percussion and some impressive lyrics. I was used to electro songs that either didn’t have lyrics or had lyrics that only made sense to the artist. But IPS songs literally tell a story…even if that story is slightly demented.

I fell in love with that album and I went into school and told some people about it. I got a few positive reactions so I considered my promotional methods to be a success.

Over the years, I’ve made multiple attempts to see the band live, but I’ve yet to succeed. I think I’ve missed them a total of six times for various reasons.

I could tell the band was in a little trouble when their label, Island Records—one of the biggest major labels—dropped them. This really didn’t make sense to me because they were one of the most original electro-rock bands out there. And with the electro scene catching fire, everything just seemed messed up.

The band continued to make music on a smaller label. They put out a few EPs, mixtapes and some remixes. My favorite remix would have to be one they did for Keane’s “Perfect Symmetry.”

But back in August, the band announced they were going on an indefinite hiatus. That was sad. I’ve been lucky with indefinite hiatuses. Most of the bands I like that have gone on these hiatuses were back in the studio after a couple years. I can only hope that the IPS saga ends up the same way. So I just wanted to give a shoutout to a band that deserved a great deal more than they ended up with.