Women’s Wear Daily, the beacon of fashion direction for fashionistas, has declared that puffer coats will be one of the hottest trends for Fall 2012. Wait – what?!? Yes, you read that correctly…puffer jackets, like those fluffy, poofy down-usually-encased-in-nylon marshmallow jackets that everyone in Ithaca wears from late autumn to spring

Who would have thought that Ithacans would have been way ahead of the fashion curve with this trend? Let’s face it – puffers have gotten a bad rep. Evidence why is below: 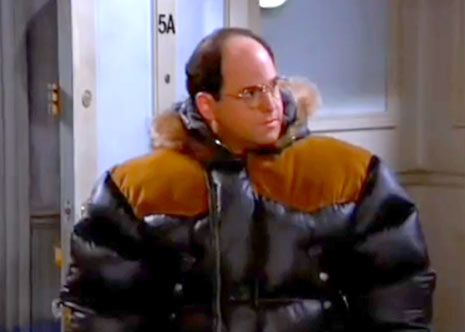 I, for one, have always avoided the puffer jacket like the plague, preferring instead a slimmer, but less toasty anorak. Maybe it’s time to embrace the puffer. Since I’ve been here in Milan, I’ve noticed that almost all of the Italians wear puffer jackets, but in a slim, streamlined way that convinces you that they’re wearing them because they’re chic, not because it’s freezing outside. The best way to wear a puffer, at least as I’ve learned from my time in Milan? Grab a Moncler and a pair of aviators – you’ll be the coolest kid in a puffer!