Pushing it to the Limits

On the walk, we have a few personal vehicles, which are used as “sag wagons” or “blister buses.” They provide support for the marchers throughout the day of walking, either by giving them water or gear. If someone can’t go any further, they get in one of the sag wagons, and if the vehicle fills up the carful of people are driven to camp to be dropped off.

There are some people on the march who are called spirit walkers. This means they walk every single step of the march that they signed up for. Got blisters? Doesn’t matter, walk on them. Break a toe? Well, here’s a pair of crutches. Keep going. 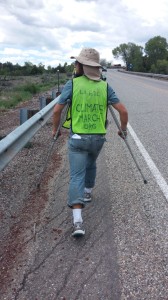 Mack, a spirit walker, broke his toe a while back, but that doesn’t stop him.

While I wasn’t necessarily sure if “spirit walking” was what I wanted to call it, I had ambitions to walk every step of my path, from Taos to D.C., as well. I have quickly discovered that this is easier said than done, and I have a long way to go in developing both my physical and mental strength.

On Saturday when I joined the march, I met the marchers in Taos. They had already been walking for part of the day, and I was catching the tail end — the walk from the Taos visitor’s center to Kit Carson Park for our rally. The next day was a rest day, and we stayed in our camp at the Hanuman Temple. On Monday, I was ready to walk full mileage, but upon reaching the first break point, I realized I had lost my phone. Our commode driver who marks the break points, CB, helped me look for my phone for over an hour, and by the time a local found my phone and brought it to us, the marchers had nearly reached our lunch stop, so I had to be driven to lunch to make sure I could get my food on time. Although I walked from lunch to camp, I still missed a chunk of the day because of that. 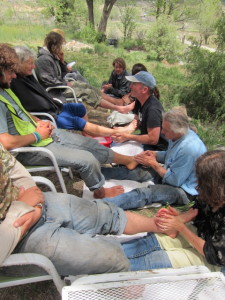 Our lunch break at the New Buffalo community the day I lost my phone. Marchers got foot rubs! 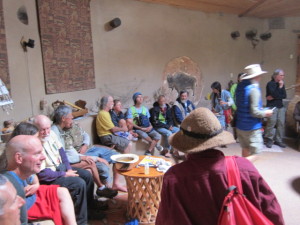 The room where we received our blessings before lunch. 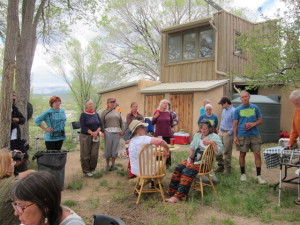 A beautiful day for eating outside!

Tuesday was only five miles to our next camp, with 2.5 miles from camp to the Lama Foundation, which was where we had dinner. The caveat to this “short” day was that it was all on steep incline. I completed the five miles to camp and the first 2.5 up to the foundation, but I accepted a ride back down to camp. Technically, the walk up to the foundation was not considered part of the official route, so spirit walkers didn’t need to walk it. However, I was still disappointed that I wasn’t able to make it for 2.5 more miles. At this point, my feet were collecting many blisters. 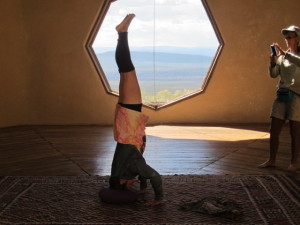 Sean doing a headstand inside one of the Lama Foundation buildings 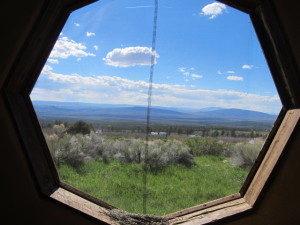 The view from the Lama Foundation 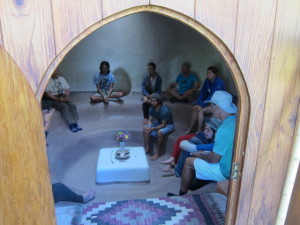 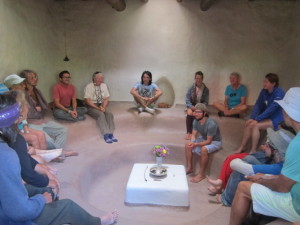 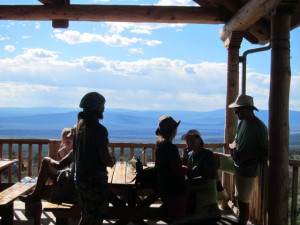 The balcony where we had dinner

Wednesday was a 12.7 mile walk from our camp near the Lama Foundation to our next camp around a Buddhist Stupa. As my feet, which only had rudimentary wrapping, got worse and worse, the pain became impossible to ignore. After stopping at the last break point before camp, starting up again was rough. It’s always particularly painful after taking a break, and it takes a little while to get back into the rhythm. As I left the breakpoint it started raining fairly hard, and between that and my feet I threw in the towel with about three miles to go to camp. When I got back to camp I didn’t get out of the sag wagon for a while — I stayed in the back seat and took a brief nap, unwilling to get on my feet. When I did come out, I limped my way through camp and started to set up my tent much slower than usual on my tender feet, my eyes swimming with tears. I wasn’t crying from the pain, but from the shame of not finishing. People at camp kept telling me that it was okay, and I should do what I could, but I kept thinking about the spirit walkers. They were in my position when they started walking, and yet they found the strength to keep going through the pain, a strength I could not seem to find in myself yet. 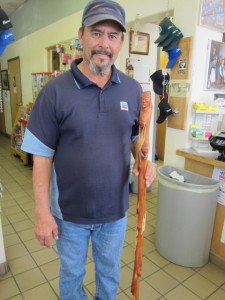 Toward the beginning of the walk, we made a brief stop in a gas station and one of the attendants was very eager to compare walking staffs. He loved what we were doing. 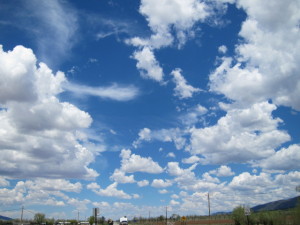 One of the few things I had to distract me from the pain was the sky.

On Thursday, I found a glimmer of hope. With my feet properly attended to and wrapped (including duct tape bandages to hold the moleskin on firmly) I set out from the Buddhist Stupa toward Costilla with a determination to finish the day’s 13.5 miles. We decided to all walk together that day — you would think it would be a given that we all walk together, but in reality the fast people go ahead and the slow people go at their own pace and within an hour our “march” is a couple people walking together here and there. Because we walked together on Thursday, there were lots of people to talk to and the first five miles melted by. But after our first break it started to get harder. I tried my best to stay distracted with talking and group singing, but a couple miles later I was sagging at the end of the group with the sweeps (the people who bring up the rear).

I couldn’t give in. I pulled out my iPod and headphones, and my music allowed me to escape from reality, to draw my attention away from my feet and into my mind. I picked up the rhythm and with it, some speed. Much to my amazement, I soon found myself up at the front of the procession, and then passing by the fastest people. As I got a little farther ahead, hopefully at a range where I wouldn’t be annoying, I started singing along to my music at the top of my lungs, and I reached total abandon. There was nothing stopping me, and the last four miles ahead of me were just a few steps. When I got to camp I was exhausted and everything from the hips down hurt, but I couldn’t stop smiling. 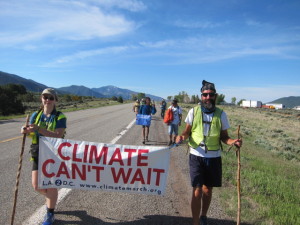 Jeffrey and I carrying our banner at the start of the day. 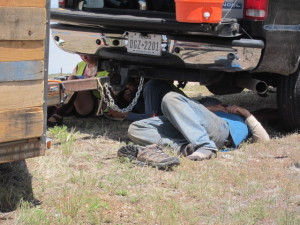 Sean, Mack, and Ben hiding from the sun under the break truck.

Today was a 20 mile day, and we crossed the border from New Mexico into Colorado in the first mile and a half. I knew going into today that I was not yet ready for 20 miles, so I volunteered to drive the sag wagon for the first half, and then I walked the second half: 10 miles. I managed to do it without music, and mostly by myself – after lunch the marchers spread out a lot. It was definitely a mental game; I had to keep convincing myself to keep going. When I got to camp, it was hard to imagine that what I had done was only half of what others did today. In particular, Sean and Mack, who have taken a vow of silence, walked all 20 miles today while fasting! 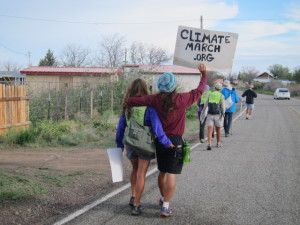 Lala and Jimmy walking together to the border 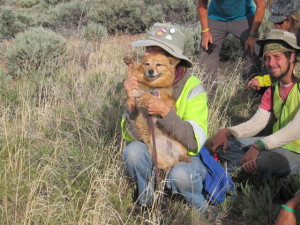 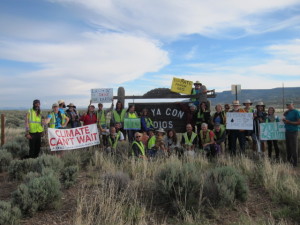 This sign near the border says “Go with God” 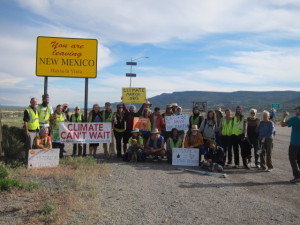 Watch us cross the border: https://www.youtube.com/watch?v=23gTtx5wrb0&feature=youtu.be 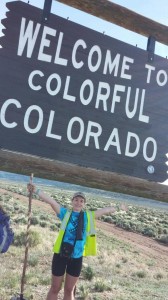 The Great March for Climate Action is teaching me about my limits and pushing me to the very edge of who I thought I was. I’m not sure who I’ll be when I arrive in D.C., but I look forward to meeting her.