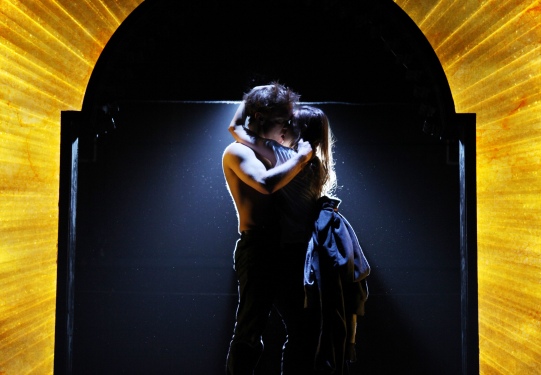 This weekend, I took a two-day trip to Stratford-Upon-Avon, William Shakespeare’s birthplace, with the Ithaca College London Center. Aside from the two beautiful days of warm English weather and touring the fantastic town, the best experience in Stratford was seeing “Romeo and Juliet” at the Royal Shakespeare Theatre. Revived with new facilities and a stunning stage, the RSC put on the best production of The Bard’s classic love story that I have ever seen. That seems to be a nice trend since I’ve been abroad in London. You can find really great theater over here.

The production gave “Romeo and Juliet” an angsty, bacchanal tone with its elaborate fight and dance sequences and sharp staging. An unconventional Juliet, dressed in a simple frock and Converse sneakers, and an even more unusual Romeo, in a hoodie, ratty pants and boots, made this take on the play much more interesting than the usual darling damsel/man lover story. And isn’t that what we go to revivals of plays for? Something different?

As the cherry on top of the cake, the cast announced at the end of the play that they would be collecting money for Red Nose Day, a charitable day recognized across the UK as a time to give money to less fortunate people in the country and oversees. Comedy and entertainment venues all over also lend their hands to the cause. The day adopts the clever phrase “Do Something Funny For Money” and several places I’ve been to have encouraged patrons to go the extra mile to help those in need.

Red Nose Day was yesterday, but it’s never too late to help out. Find out how you can do your part post-Red Nose Day and look for charitable organizations in your area through their website!