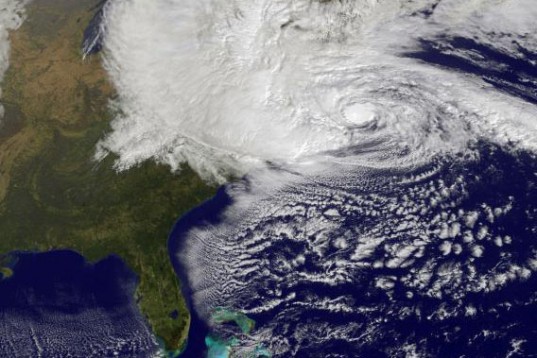 All but forgotten during the presidential debates, the issue of climate change became prevalent once again with the arrival of hurricane Sandy.

Many pundits and observers debated over whether the storm – one of the biggest to ever hit the east coast – was amplified by our warming globe. The truth is, due to their complexity it’s nearly impossible to prove a causation between man-made climate change and natural disasters. However, there are links.

Hurricanes form from warm ocean waters. The warmer the climate and the water, the more moisture the storm retains and the more powerful it becomes. This is bad news when you consider that the world’s oceans have warmed consistently for the past 20 years. And while these warmer waters may not directly cause more storms, they ensure that the storms that do form are stronger.

Does it seem like there have been a lot of natural disasters recently? You’re not imagining things.According to a study issued by insurance giant Munich Re, the United States has seen a marked increase in weather-related natural disasters in the past thirty years.

In fact, the report states: “Nowhere in the world is the rising number of natural catastrophes more evident than in North America. The study shows a nearly quintupled number of weather-related loss events in North America for the past three decades.”

Katrina was supposed to be the wake up call for climate change and natural disasters. Now here we are seven years later with a second chance. Will we take it?

For more reading, be sure to check out this article.