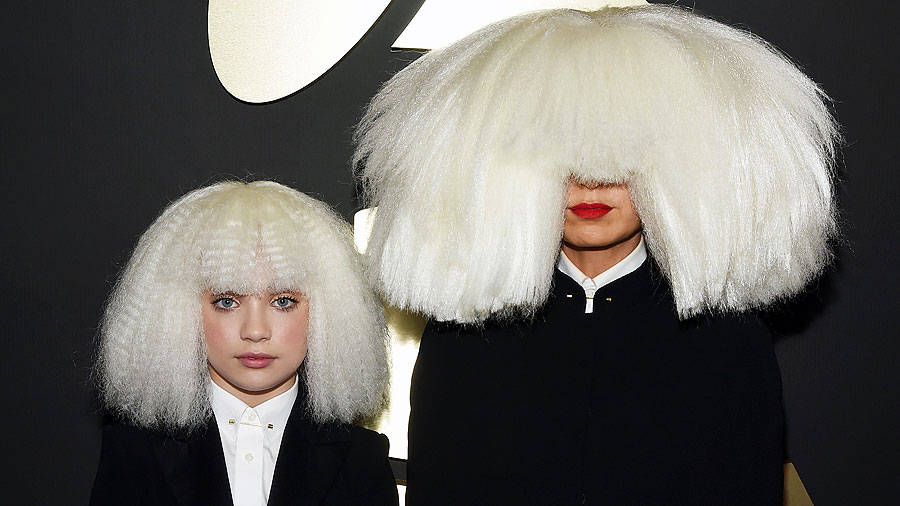 If you are anything like me, you watched The 57th Annual Grammy Awards, and you loved every second of it, minus a certain album winning over the Queen herself. (It’s best not to talk about it.) However, with all of that happening, there was something, in particular, that annoyed me to no end. No, I am not talking about Kanye West. I thought what he did was actually pretty funny. No, I am not talking about Rihanna looking like she is getting ready for her quinceañera. (She looked like a cupcake…) I am talking about Sia Furler.

I think that Sia’s voice is one of the best in the entire music industry right now. If it isn’t enough that she sings “Chandelier,” “Elastic Heart,” “Titanium,” and “Wild Ones,” she is also a songwriter for Beyoncé, Rihanna, Birdy, Lea Michele, Celine Dion, Britney Spears, Katy Perry, Jessie J, and so many more. At 39, she is a force to be reckoned with, but I can’t help but be annoyed by her.

Don’t get me wrong. I do, particularly, enjoy her music videos. They are not only creative, but also thought-provoking, even if she uses washed up celebrities like Shia Labeouf. However, despite all of this, there is only a certain amount of weird that I can take. For example, during the Grammys, she stood in the corner while Maddie Ziegler, a dancer on Dance Moms, and Kristen Wiig, a cast member on Saturday Night Live, did a dance routine. It was not only creepy but, for some reason, I had flashbacks to the movie Children of the Corn.

I feel like, at this point, Sia’s entire presence is just a ripoff of Lady Gaga’s crazy outfit phase. She even wore a huge wig, so that people couldn’t see her face. Sia claims that it’s because she doesn’t want to be recognized. She does not like the attention and does not want to be criticized on the Internet for the way that she looks. However, this is the celebrity equivalent of Shia Labeouf wearing a paper bag over his head back in early 2014 with the phrase “I Am Not Famous Anymore.” It has the exact opposite effect. Instead of pushing attention away, it just gives more room to criticize.

Now, I would be more okay with this if no one knew what Sia looked like. However, a quick Google search of “Sia” plasters her face right across my screen. So, what’s the point? Her voice is absolutely flawless, and her album was actually really well-done. Why not bask in the attention?

Sia, apparently, has an answer for this. According to Hollywood Life, a celebrity gossip website, Sia claims, “If anyone besides famous people knew what it was like to be a famous person, they would never want to be famous.” Now, as a person aspiring to, someday, achieve celebrity status as either a writer or an actor, I am highly offended by that statement. Like everything else in life, there are pros and there are cons. Yes, many celebrities are criticized ruthlessly, but grow a backbone and get some thick skin. Sia, you live a luxurious life, you have a voice that people will listen to, both when you sing or simply express your opinion, and you will be remembered for a very very long time. There is good and bad to every job. Your job is no exception.

I know all of that may seem a little cold-hearted, but people, like me, who grew up with parents that struggled and are just looking for their big break, should be offended by this. I dream every single day that I will be able to live a lifestyle like Sia. So, a few people asked you for a picture and others wants an autograph. That is a small price to pay for the loads of money that you receive daily. And ff you can’t handle it, make room for someone who can. You have the ability to make a difference. Use that ability wisely. Don’t just stand in the corner and shut out the world with a white wig. Step out, do what you love, and forget the haters that criticize you.

All of that aside, I love Sia, as an artist. She is an amazing singer. However, I think some things needs to change before I appreciate her as a public figure, too.

Thank you all for reading, and I hope you all have a wonderful day.

DISCLAIMER: So, I read some of the comments that I got on this post and I found out some interesting things. Sia does have social anxiety and a thyroid condition, so this is a part of the reason that she does not reveal her face. She tries to avoid criticism for it. I apologize to you, Sia, if you are reading this, which you’re not. Stay strong.