The Beef with Anthropomorphic Advertising 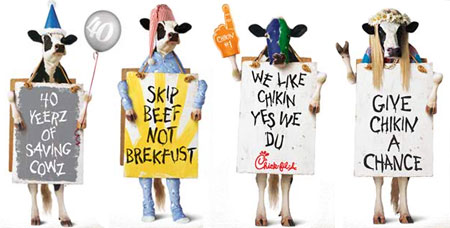 Maybe it’s just me but….

Does anyone else find the anthropomorphization of animals by commercial agribusiness disgusting? Walk into any grocery store and you’ll see quirky tuna fish in glasses and hats or laughing cows on food labeling. As if exploiting animals through systematic slaughter, harvesting, and production wasn’t bad enough, somehow advertising teams can’t come up with ways to market food without cutesy images of animals enjoying their death. So clever.

One of the most distasteful examples of corporate anthropomorphization is the “Eat Mor Chikin” campaign. As if you needed more reasons to boycott Chick-fil-A, their controversial advertising campaign, first introduced in 1995, features activist cows promoting the consumption of chickens. These “renegade” cows often star in commercials and billboards with their misspelled campaign posters like “Du the Chop, Eat the Chikin.” Ya know, because cows can’t spell. Adorable.

One can’t help but wonder why cows are personified as ardent activists with an agenda to shift the habits of consumers. Metaphorically, it seems like a sick slap in the face to the thousands of food sustainability advocates and animal rights activists who actually do devote their livelihoods to creating a healthy and just food system. In actuality, it was probably just the “wittiest” marketing ploy the Chick-fil-A team could come up with. Cows supporting Chick-fil-A and slaughter of chickens because they don’t want to be slaughtered themselves – someone call Don Draper, we’ve got advertising gold!

If you were wondering where Chick-fil-A stands on the controversial cow protests, you can rest assured knowing that “Chick-fil-A fully endorsees and appreciates the monumental efforts made by our most beloved bovine friends.” Aw shucks, they’re really sticking their necks out for the well-being of cows.

Regardless of campaign failure or success, this type of anthropomorphized advertising distantiates food production from food consumption. Silly images of cute animals acting like humans helps us forget how messed up the commercialized food system actually is. If Chick-fil-A instead marketed their cruel (and extremely unhealthy) products with images that realistically portrayed the factory farming industry, perhaps people would think twice about shoveling chicken sandwiches into their mouths. What’s worse is that not only are animals exploited, but they are then subject to patronizing advertising campaigns that belittle their inherent worth as co-inhabitants of this planet. Anthropomorphic advertising by food companies makes light of the true issue plaguing commercial agribusiness: the needless suffering of innocent lives.

Maybe it’s just me but….

Systematic slaughter is no joke.