Yesterday, the last day of my spring break, an ankle injury and rain kept me inside a café drinking coffee and staring out the window instead of exploring like I wanted. As I kept looking out the window, I noticed police vans started to show up outside, then groups of people appeared with banners, and a circle of women started playing the drums. After feeling bummed about not getting to do anything adventurous or cool that day, I didn’t expect to stumble into a rally for International Women’s Day in the middle of Berlin. 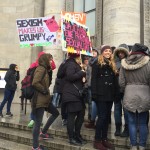 It was unexpected and powerful. It was also interesting to get to see an event that celebrates women of all different experiences, backgrounds, and places in a brand new country. I notice that each different place seems to be fighting for their own specific feminist causes and issues in one way or another. That being said, we are also fighting for the same thing—a better, more equal world free from patriarchy.

The thing about patriarchy is that it hurts everyone. Even though the day is centered on women and the issues they face, it should matter to everyone.

At the rally, I also noticed that there were a lot more men and young children there than at women’s rights events I’ve attended in the States. During my time in Germany, I saw posters with quotes from feminist leaders, a sign for a feminist film festival, and a bathroom filled with stickers advocating for LGBTQ+ rights. Berlin seems to be much more open about these issues than the States under a culture that perpetuates the idea that feminism is no longer necessary. 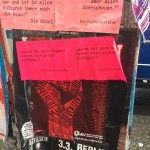 Feminism—the word and the movement—doesn’t seem to carry the same connotation here in Berlin as it does back home.

International Women’s Day is an acknowledgement that there is still work to be done. That’s why this coming Tuesday is so important.

Patriarchy and inequality must be acknowledged first for change to happen.

The rally also focused specifically on breaking down and dismantling racism. Many of the signs people were holding up in the street were in various languages advocating for different issues facing each community.

The most important component to feminist activism is remembering that marginalized women—women who aren’t straight, white, able-bodied, cis-gendered, etc.—have even harder time navigating through patriarchy and are disproportionately impacted by things like the pay gap and gender-based violence.

Mainstream feminism can sometimes (no matter how unintentionally) forget about this and be exclusive. But it’s critical that feminist activism is intersectional—meaning that it recognizes that different aspects of one’s identity and oppressive institutions are interconnected and informs how much privilege one has.

For more information on intersectionality for this International Women’s Day, check out this article.

Want to get involved with International Women’s Day more? If you’re a student at Ithaca College, click here for all the events.

You can also #pledgeforparity here! 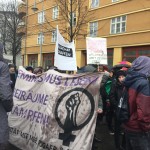