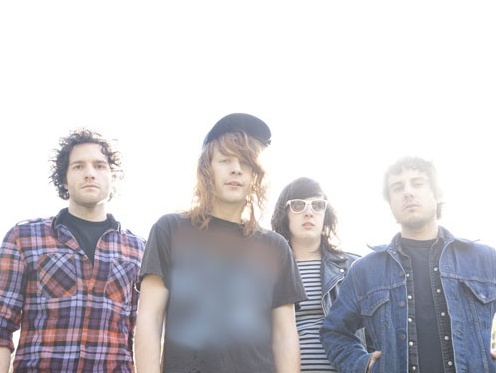 I’m kind of obsessed with this new band called Dom. They’re a fresh, young band coming out of Worcester, MA (pronounced wuh-stuh) whose music just makes you happy. If I had to compare them to anyone, I’d say it’s a mix of Passion Pit and Best Coast: raw guitar riffs, easy beats and a dude with borderline-feminine vocals (I’m looking at you, Michael Angelakos).

I bought their EP, “Sun Bronzed Greek Gods” on a complete whim while I was browsing through the selection at Newbury Comics in Boston before an Interpol show. There was a cat on the cover (much like Best Coast’s album) and it was only six dollars. I snagged that puppy. End result: best $6 I’ve ever spent impulsively.

I even wrote a review of their album for the print edition of “The Ithacan.” That is open for your perusal: http://archive.theithacan.org/10487

But if words just aren’t cutting it, follow the link below to listen to a track called “Living In America.” Forget Francis Scott Key, I move to make this the new national anthem.